In a Field of Poppies

Happy Easter, if you are celebrating today, and happy Sunday if you are not. It's an absolutely gorgeous day here; I am just back from a long walk in the sunshine, which felt especially good considering that it was snowing here just a few days ago. I was glad to see the daffodils and tulips that had just recently started blooming weren't killed by our brief return to winter weather, though some of the more delicate blossoms on the the flowering trees in the neighborhood didn't fare so well.

My spinning has made me very happy this past week. First, I finished up the Rambouillet I was about to ply at this time last week, and not only am I delighted with the look of it, I am also very happy that I finally got some decent yardage -- 400+ yards! 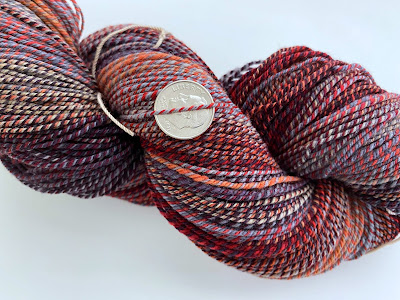 Rambouillet (a French merino, if you are not familiar with it) is quite bouncy, so the skein shrank up a bit in the finishing but not as much as it could have. I also seemed to have balanced my twist a bit better with this skein, which makes sense -- fibers with more crimp seem to be better suited to more twist.

I was a bit surprised by the range of colors in the finished yarn, as the fiber was mostly deep red, navy, and dark gray, but one thing that I love about spinning is that you can never truly judge how the yarn will end up based upon the fiber. As the fiber is drafted, the colors blend and change, so I ended up with sections of orange and purple and tan. I am happy, though, that there's still quite a bit of that vivid red, which I am fairly certain is meant to be the red of the poppies growing in the field in the poem that inspired the name of this color way "In Flanders Fields."

Shortly after I finished plying this skein, my next club shipment was delivered, having made it to me from Australia in record time -- faster, even, than some mail has taken even within my own city or state! This is January's club (we're a bit behind due to mail delays in general), and if David had dyed this colorway with me in mind, he couldn't have done any better: 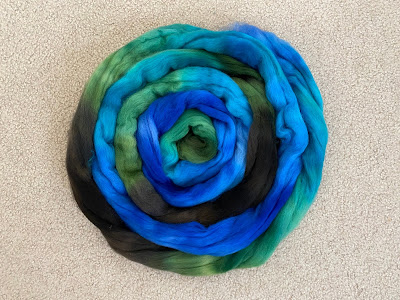 The colorway is Grazing, and it's on Bond, which is one of my favorite wools to spin. This will be excellent as a three-ply sock yarn, though I can't decide if I want to do a traditional three ply and mix the colors up or strip it down lengthwise and chain-ply to preserve the colors. It's a moot point for now, in any case, because it's not the next thing on my wheel.

Instead, I am starting what might be a rather important project. Rainbow's bat mitzvah is coming up next December, and what I have been wanting to do since we started thinking about it it to spin yarn and then commission a friend to weave a piece of cloth to create a custom tallit for her. A tallit is a prayer shawl worn by typically male Jews and often given as a gift on the occasion of the bar mitzvah. But in less religious congregations, like ours, women often wear them as well. So the plan at this point is to spin the yarn and then hand it off to the weaver to weave cloth with it, and then I will attach the pieces that make it a tallit. I thought I knew which fiber in my stash I was going to use for it, but it seems Rainbow's tastes have changed. We did a little dig through the fiber stash, and she pulled out this braid of fiber: 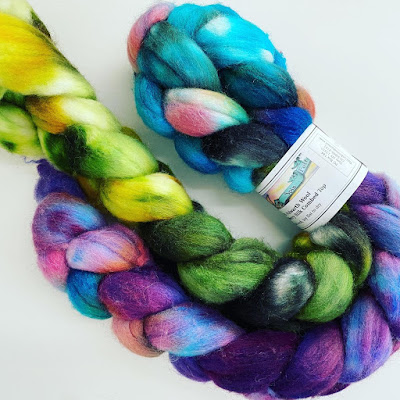 This is a braid of Polwarth/silk from FatCatKnits. It's a Day's End braid, what Ginny calls her one-of-a-kind colorways that she creates from the dyes leftover at the end of the day, called Gorgeous. Rather appropriate, I think! I divided it lengthwise into four strips that I am spinning end to end, one after the other, and when all the singles are spun, I will wind them into a center-pull ball and ply from both ends. I am spinning the singles very fine, knowing that the Polwarth will poof up when it's washed and that I want this yarn to be fingering weight at the very thickest. I'm also using one of the new Akerworks bobbins that my brother and sister-in-law gave me for my birthday, and it coordinates so well with the fiber! 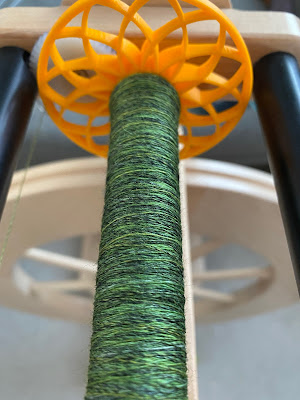 If Rainbow likes how the yarn comes out and approves it for the tallit, we also found a bundle of Polwarth in my stash in some dark shades of gray that I will spin to weave with the more colorful yarn and mute it a bit. She wants something pretty, she said, but not too loud or over the top. I think it's going to be stunning, but she gets the final say. If it's too much color, at least I end up with some pretty yarn in the end!