It would have been wonderful to have had another finished skein of handspun to share with you this weekend, but the past week was so busy that it did not allow much time for spinning. I only just got started on the second skein for Rainbow's tallit on Thursday, but I am making decent progress on it: 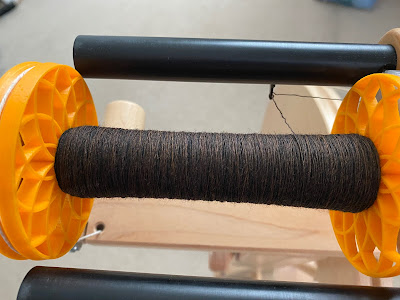 I just happen to be in one of the sections of the fiber that is a little lighter (or maybe just didn't have as much dye in it), so you can see here, at least, that it's not solid black. This skein isn't going to be that exciting to look at in progress -- and perhaps not even when it's done -- but at least I have something new to motivate me to finish.

My Southern Cross Fibre club has been behind for several months, thanks to delays in shipping that meant that first David had a hard time getting in a supply of wool to dye and then that what he sent out was taking much longer to reach its destination. So while it's nearly the end of April, the shipment for the month of February just showed up. It's a stunner and well worth the wait, though. 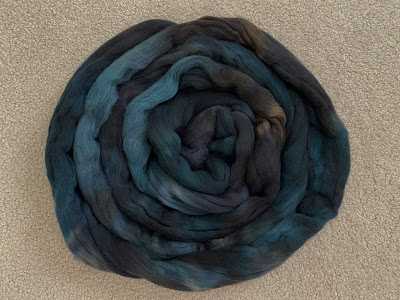 I had to edit the heck out of this photo to try to get something remotely resembling the fiber in person because it is so dark that it was completely blowing out my phone camera. The colorway is called Dark Ocean, and it's dyed on gray merino wool that adds even more depth. The variation in shade that you're seeing in the photo is less obvious in real life, but if I'd made the photo any darker, it would just be a dark blob. It occurred to me when this arrived that I had several other blue or mostly blue colorways in the backlog, so I pulled them out to compare and see how they look together: 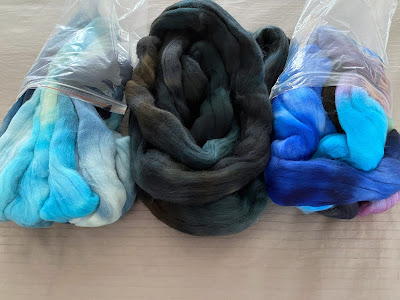 Again here the colors are not quite right -- the blues of the lighter colorways aren't quite as electric as they look here. But I like how all of these are playing together, and I thought it might be an interesting experiment to spin these all up as three-ply yarns, in the style of some of the Spincycle yarns, and then use them together in a sweater -- perhaps a Shifty? A friend did one in handspun yarn and it turn out amazing (if Ravelry is safe for you, you can see her project page here). One of my 21 in 2021 items is to spin for a sweater, and while this isn't the one I had in mind, I do like the idea of combining several bags of fiber and using them in a larger project. So stay tuned! I'm excited about this idea and want to get started on, but I will be good and finish the current skein first.