Spinning progress has been a little slower than in the past, but I'm still on track (at least as far as I'm concerned) with the spinning for Rainbow's tallit. Thanks in large part to a virtual spinning meet-up yesterday afternoon, I've officially passed the halfway point on the FatCatKnits Polwarth/silk singles. I had split the fiber into four strips and am now on the third of them. 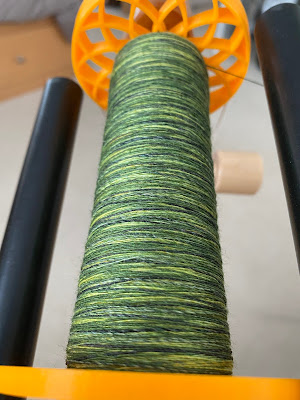 I have also pulled out the other color that we have been entertaining as a pairing for this brighter colorway, and it's from very deep stash. It's Polwarth from Crown Mountain Farms, which closed down a number of years ago (I think, in fact, that this might've been from the last order I placed when they announced they were closing). 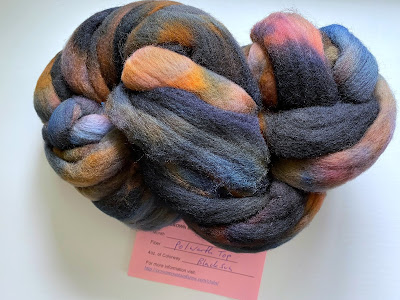 It's actually a bit darker in real life than it's appearing here (I was getting a bit of a glare from the window), but at least you can see the hints of pink and purple and orange that I think will play nicely with the colors in the brighter Polwarth/silk.

For those of you who, like me, are fans of HipStrings and are thinking ahead to the Tour de Fleece, I wanted to mention that Jill has made available some really intriguing batt options for TdF this year. I decided on the "personal favorites" option, and I'm really excited to see what she comes up with!