So Nice, I Knit It Twice

One of my 21 in 2021 goals was to knit five items for charity. I've blown well past that by now, but I'm showing no signs of stopping! I've found that a quick hat or cowl is a good break when I'm in the middle of a larger project, and when my sweater started to get just a tad boring in the last week, I though I'd knit up a quick hat as a breather. I had so much fun with it that I almost immediately cast on a second! 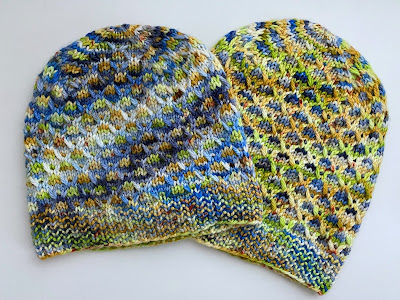 The pattern is the Ice Time Hat (Ravelry link) by Jennifer Lassonde, aka Boston Jen of the Down Cellar Studio podcast. The pattern calls for DK yarn, but I used two skeins of Fibernymph Dye Works Cozy (worsted) that were part of a yarn club Lisa did several years ago in which she dyed yarn inspired by a camping trip she took with her husband in Killarney Provincial Park in Ontario. The bluish colorway is called Twilight on Harry Lake and the yellow/green is called Magical Marshes. Despite using a thicker yarn than called for, I went down in needle size (to a US 4/3.5 mm and US 6/4.0 mm) because I was worried my fabric would be too loose otherwise.

For the first hat, on the left, I used the yellow/green as the main color and the blue as the contrast, and I switched them for the second hat (well, mostly -- I accidentally cast on with the wrong color on the second hat, so the brims are identical, but I threw in an extra round so that the patterning would be reversed). The stitch pattern is a slip-stitch mosaic stitch, so you're only knitting with one color per round. Because both of my yarns were variegated, it looks much busier than it is, rather like an Impressionist painting. Here's one of Jen's photos from the pattern using two solids, showing off the pattern much more clearly: 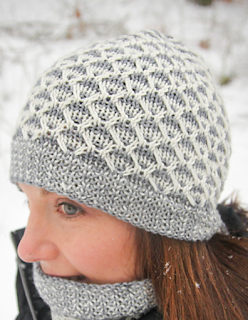 Because the first hat ended up a little snug and a little shallow for my taste (though it'll be fine for a child), I decided to add an extra vertical repeat for the second hat. There is only one size in the pattern, so I couldn't make a larger size, but I figured the extra length would help. I also decided to try a slight change in the stitch pattern. As written, the pattern involves two rounds per repeat with two-stitch cable crosses. These aren't hard (I managed them just fine without a cable needle), but they are a bit slow, so I thought I'd try right and left twists, which are sort of faux cables, in place of them. I think the overall effect is pretty much the same, though if you look closely, you can see a difference, especially on the right twists: 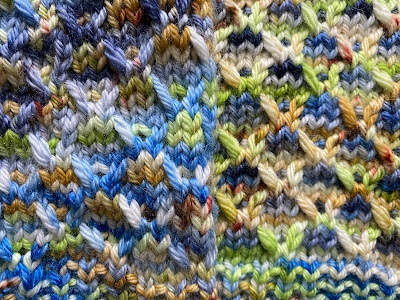 It's pretty subtle. I think the overall effect is that each slipped stitch actually ends up being smaller when worked as a twist than when worked as a cable. And I think it's the reason why the second hat, despite having eight more rounds than the first, somehow used less yarn that the first!

Both hats are in the charity pile now, and I still have just under 200 yards of the yarn left, so I will probably use them for a cowl (I'm thinking two-color brioche). At some point I'll try the pattern again with two solids, or maybe one solid and one variegated, and perhaps I'll use larger needles. I will say that the pattern is very well written and easy to follow, so if you're looking for something that looks really impressive but isn't hard, I'd recommend it!