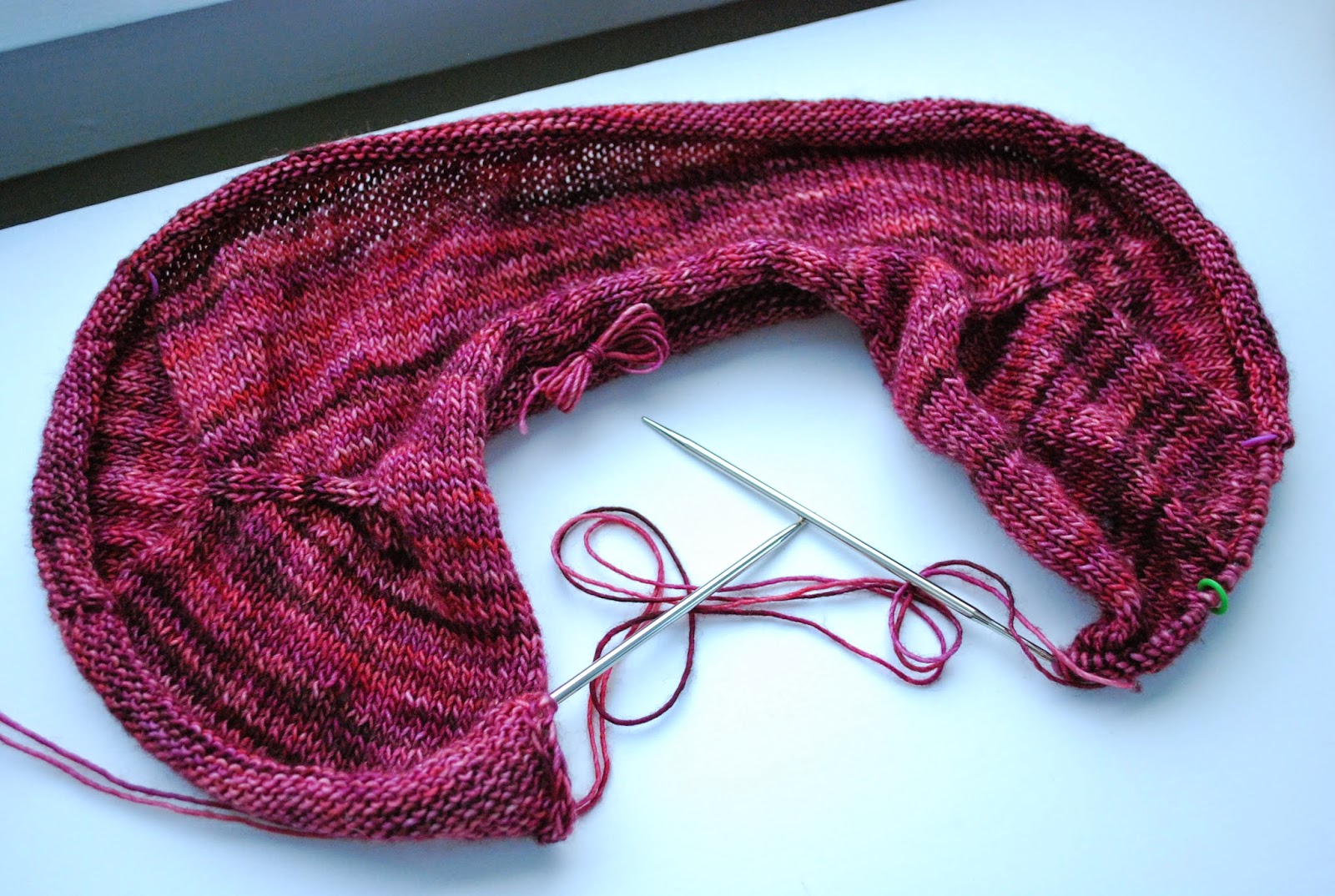 This sweater is knit using the Contiguous method, which is a fascinating construction technique. If you've never used it before, I'd recommend taking a look. It's a bit tricky to explain, but the gist of it is that it's completely seamless from the top down, and the collar of the sweater is worked along with the body. For this sweater, you actually start with the collar, specifically at the back of the neck. You cast on and knit a few inches in one direction, then pick up from the cast-on edge and knit the same amount in the other direction. Then you pick up stitches along the long edge of that knit strip, place a bunch of markers, and do increases in particular spots to shape the top of the shoulders. I'm at the point now where the marker placement has been adjusted and the increases are limited to between two sets of markers to shape the sleeve cap.

As I'm using a hand-painted yarn (Dream in Color Jilly, which is very similar to Tosh Merino Light), I'm using two skeins and alternating them every two rows to avoid color issues. I know it'll be better in the long run, but it is a bit of a pain to have to untangle every two rows.

Also on small needles is the new(ish) pair of socks. The first sock was finished today, and the second one was promptly cast on. 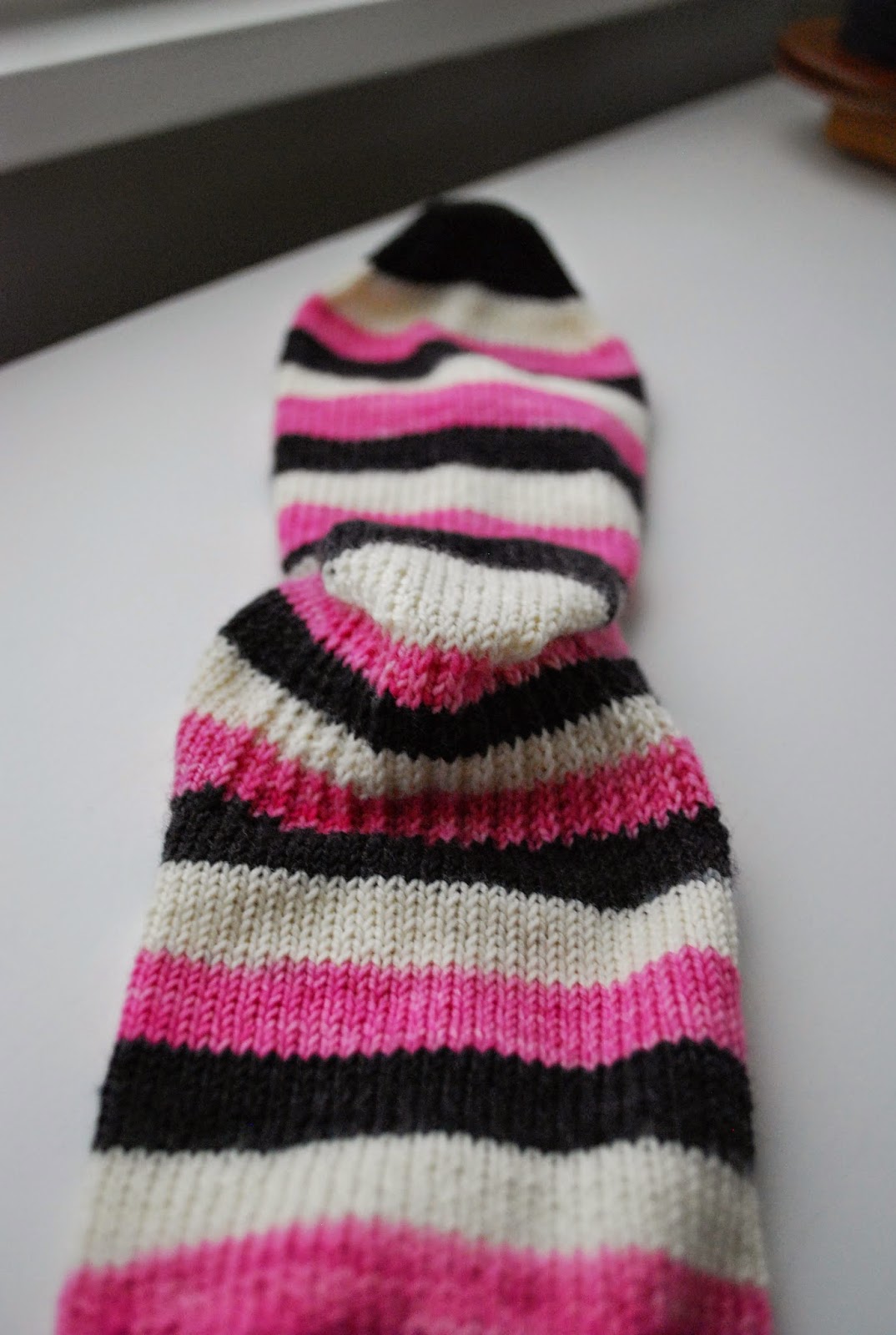 I'll share more of what they look like when the pattern is closer to being ready, but at least you can see the awesome stripey yarn. I'm hoping to find some time this weekend to finish up the pattern draft (the basic instructions and information are all written up, but there are charts to transcribe, which is tedious work). I'm hoping to have the second sock done in the next week or so.

I did have a bit of a falling down at my LYS last week (though I didn't buy yarn). Like many knitters, I really appreciate a good project bag, and my LYS has been carrying bags by Sasha for a while. I have two of her sock-sized box bags and quite a few of her notions bags already. I'd been eyeing one of her wristlets at the shop for several weeks, so when the shop announced that the latest batch of bags they'd received from Sasha would be the last they would carry (because she is going to focus on stocking her online shop), I decided to finally pull the trigger. Another one caught my eye as well, so it came home with me, too. 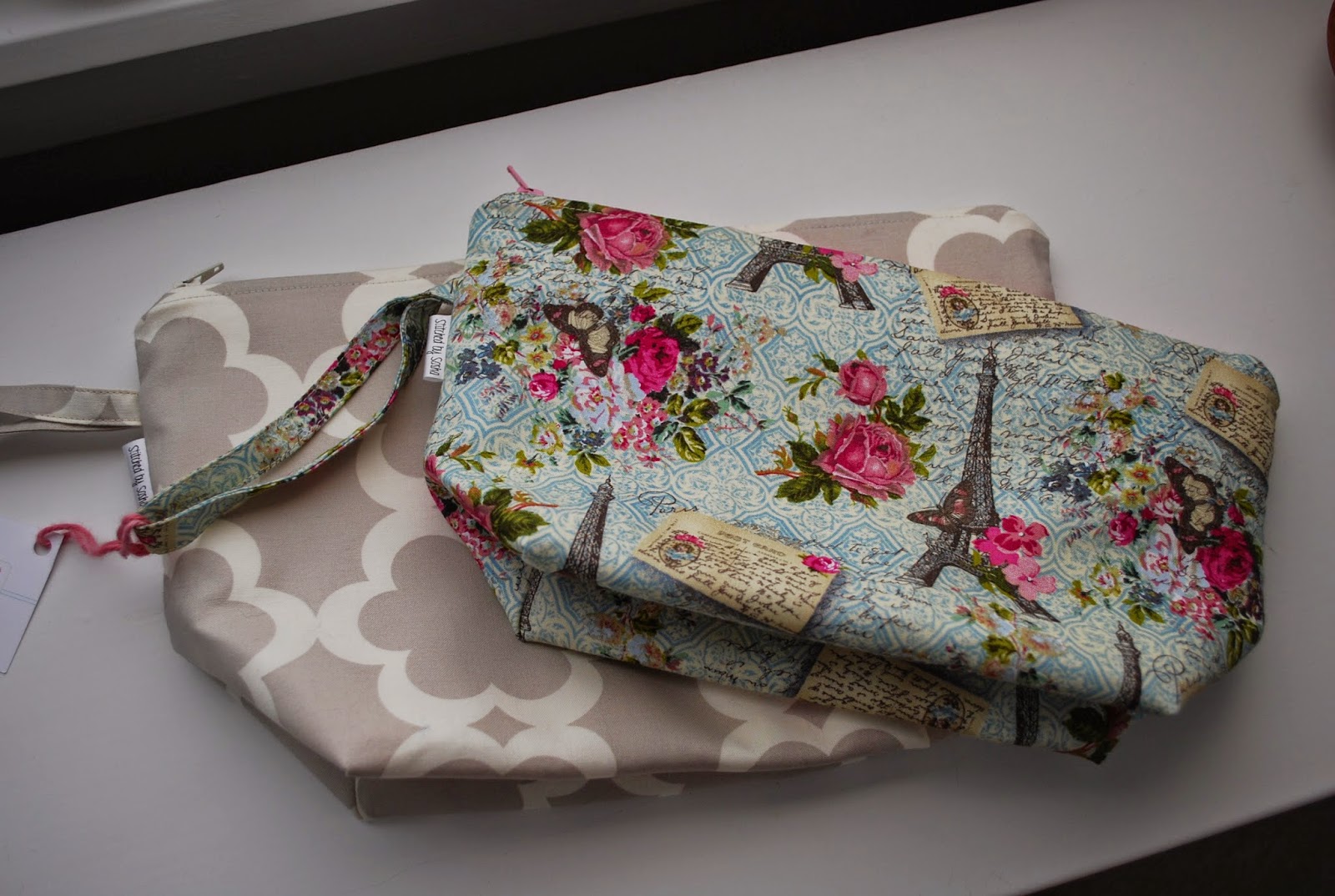 These are just the right sizes for two projects I have on the needles right now (Airflow can go in the larger bag, and my Cerise can go in the smaller), so I don't feel too guilty. Plus, it's always nice to buy something that's hand made -- and it's doubly nice when you actually know the person who made it!
Posted by SJ at 5:27 PM