If there's one thing I've learned from my knitting this week it's that I should not start slightly complicated sweaters when my head is foggy from a bad cold. I cast on for Zephyr on Saturday, after doing all sorts of calculations to figure out what size to make, and had nothing but trouble from the beginning. First, I misread the directions for the stitch pattern and had to frog and start over. Then I missed the line telling me to work one more row on one side of the band than the other and had to rip out because I'd picked up stitches on the wrong side of it. Here's what it looked like before knit night last night: 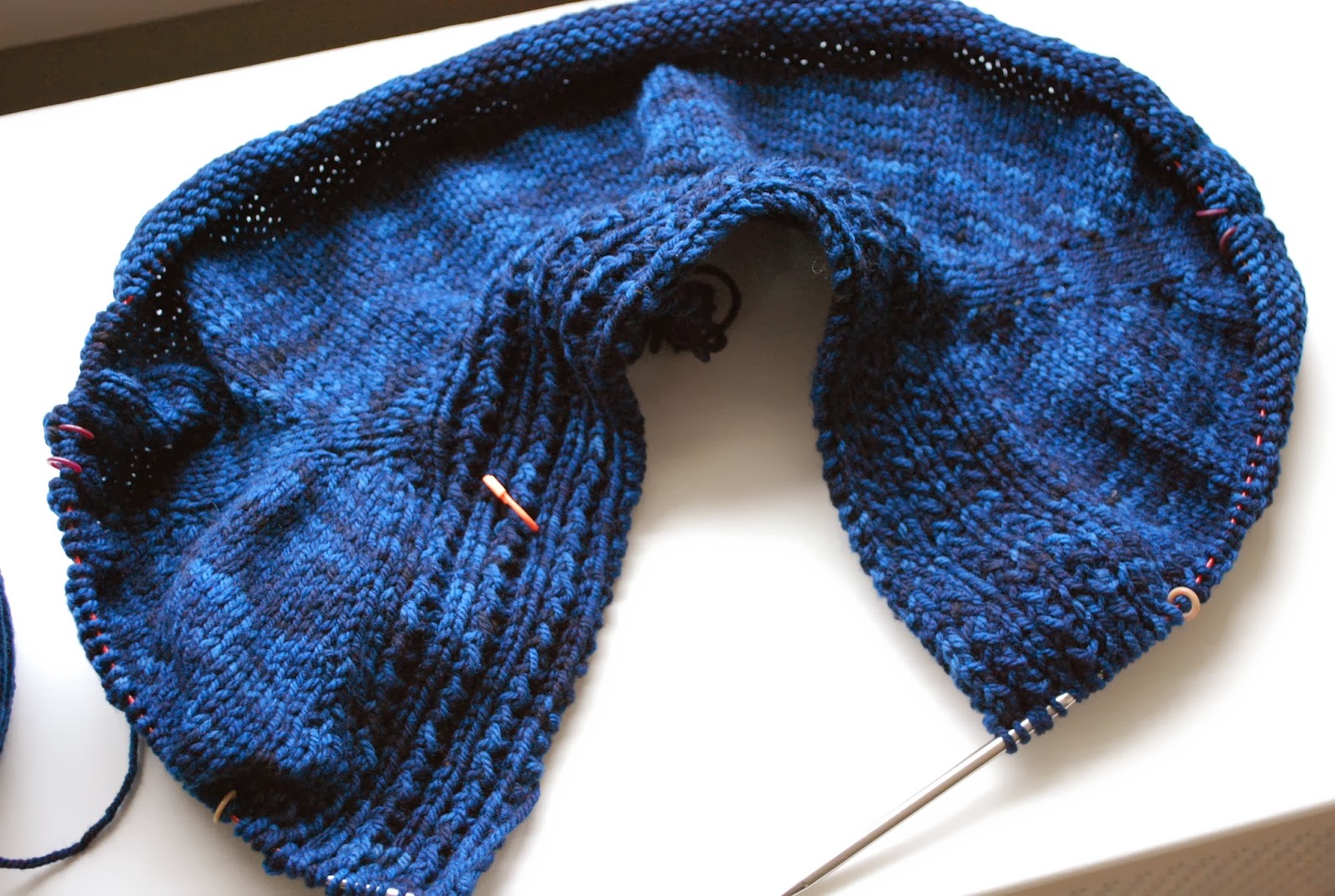 I show you this picture because when I pulled it out to work on it at knit night, I discovered that about 20 rows back, I'd missed an important direction about where to do certain increases and had been doing them in the wrong place all that time. So I had to rip back about half of my work and to fix that particular error.

It's actually quite a clever pattern -- perhaps too clever for my cold-addled brain at times. It's constructed using the contiguous method, which is a way of creating a set-in sleeve look with a construction that's similar to a raglan. In any case, you start with the band (not really a button band, because there are no buttons or buttonholes in it) by doing Judy's Magic Cast On for the middle of the back of the neck. You work the band for a certain number of rows in each direction, then pick up the stitches along the side. Then you begin working several kinds of increases (for the back, the V-neck, the shoulders, and the sleeves) while continuing to work the bands. That means that there's a lot to keep track of at all times, so I'm not surprised that I missed a couple of things. The pattern is also written a bit unusually to account for different directions for different sizes, so I'm making liberal use of a highlighter and a pen to make sure that I'm paying attention to the things that I need to and ignoring the things that I don't. I'm hoping my frogging and redoing is over for the time being.

When the sweater proves to be too much, I've been working on my handspun brioche cowl, which requires little to no thinking and is now starting to resemble a Jayne hat. 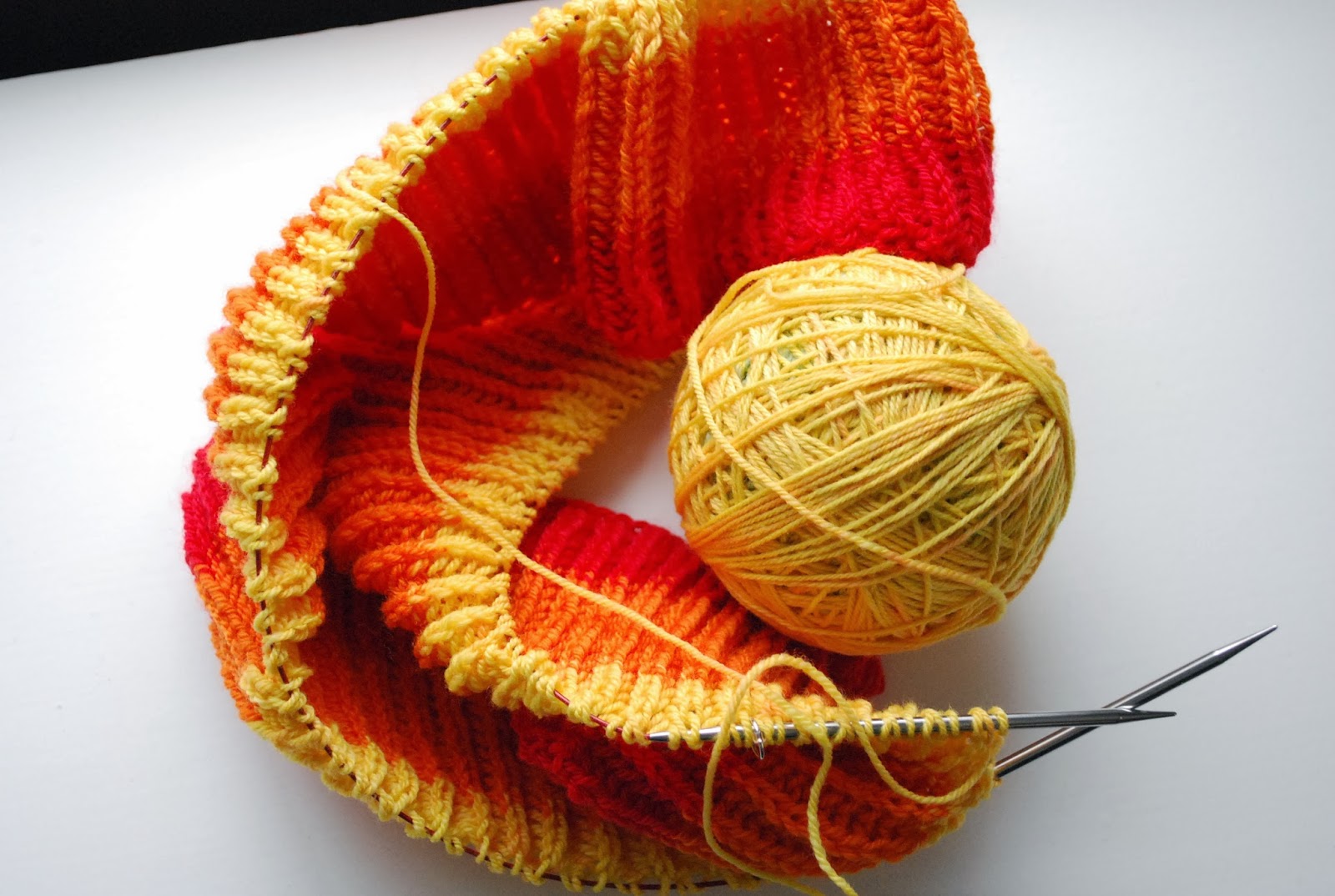 It's become my lunchtime project (at least until I wind some more sock yarn), because I finished Rainbow's handspun socks last night: 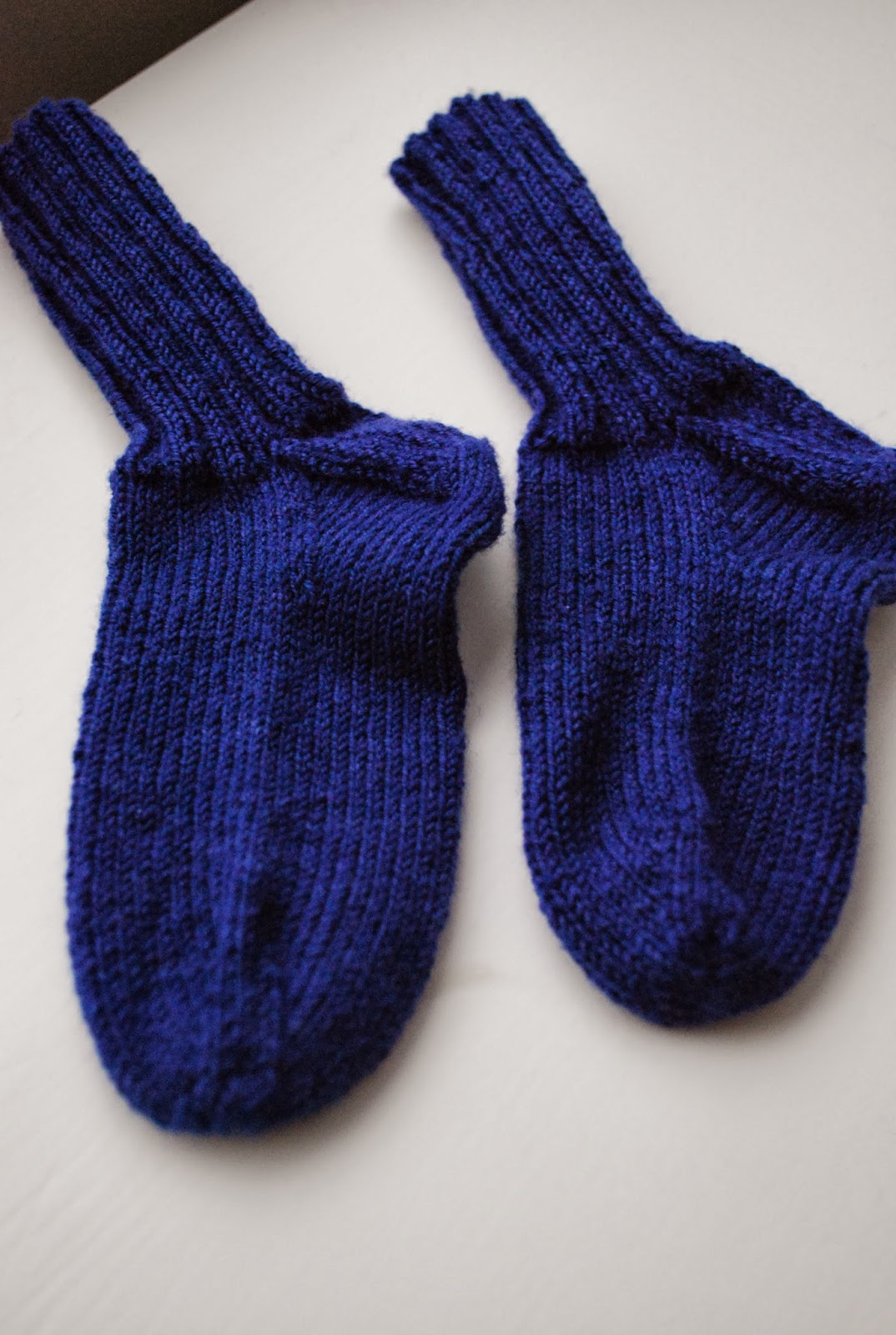 I know these still might look small to some of you, but I can't get over how big they are. Sometimes I miss my baby and her tiny feet -- the socks certainly used to take a lot less time to knit up! I predict that she'll be able to wear these for maybe a few weeks before they get too small, but hey, it was a good excuse to use up some leftover handspun (though there's still more of it, so I have to figure out something to use it for).
Posted by Sarah at 5:56 PM