Normally at this time of year, I'd be doing all the spinning I could. This year, however, I have knitting that has to continue, so I feel like I've been bouncing from one thing to another.

I did primarily focus on spinning over the weekend. Yesterday turned out to be a pretty crummy day (overcast all day, with showers in the afternoon and evening), so we all pretty much sat around all day. I watched two movies on my laptop and spun for much of the day, which resulted in finishing up the second bobbin of FatCatKnits BFL singles: 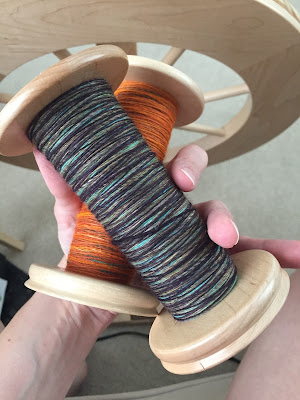 I started plying later in the afternoon, and I'm a little more than halfway through. I'll try to finish this evening while the Mister puts Rainbow to bed. I'm plying on my miniSpinner, so it's a pretty easy and mindless project. 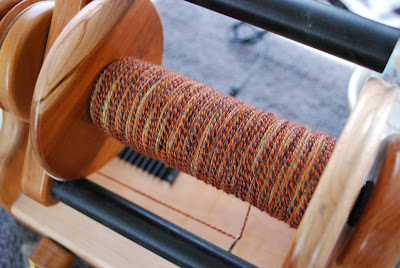 While the above bobbins were resting, I spun a little bit on my Sheep to Shoe kit, which I'm spinning for three-ply sock yarn (well, I'm going to chain ply this bit, anyway). These singles are very fine, as you would expect, so it's not a fast spin by any means, but I think it will be a good one. 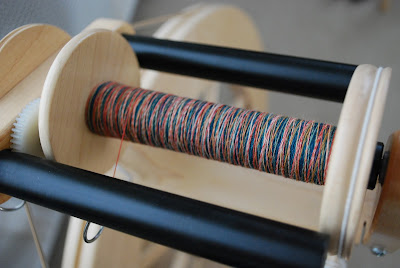 Because each S2S kit comes with 8.5 oz. of fiber, I thought it would be interesting to do a bit of a comparison. The first half, which you see above, I will chain ply after splitting the top vertically into four strips (so the colors will repeat and the knit fabric will stripe). The other half I will split into thirds horizontally and do a traditional three ply. The colors will obviously be the same, but the two finished skeins will be a good representation of the ways you can play with color in spinning.

The knitting that is still going on primarily consists of two projects: my Waiting for Rain, which is nearly finished, and the colorwork mittens, which are about halfway done. I pulled out the shawl last night for about an hour and got to the final lace section, so I'll attempt to finish that tonight. The mittens are turning out to be a quick and easy knit, so I may have a finished pair by the end of the week. 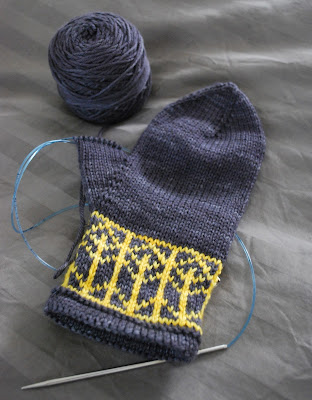 I'm still a little bit in denial about it already being July -- the summer seems to be going by way too quickly. I had hoped to have all the collection knitting done by the end of the summer; once the mittens are done, I'll have five more samples to knit up (but two of them are the largest patterns and will likely take the longest to knit). The good news is that the first two have already been through my tech editor and are in testing, so at least I'll get those squared away while I work on the rest. And fortunately the deadlines I've set for these patterns are entirely my own, so I can give myself an extension if I need one!
Posted by Sarah at 8:28 PM