This past week, I was determined to finish up the last Tour de Fleece spinning project I still had left on my wheel. I spent just about every evening working on it, including two full evenings plying, and while my back was not so happy with me, I was very happy to skein up the finished yarn on Friday night. Back in the days when I was spinning nothing but three-ply sock yarn, I had a pretty good sense of how much yardage I'd get from 4 oz. of fiber, but I'll admit I was really surprised when this skein was dry and I measured it to calculate the yardage. Granted, I probably did have more than 4 oz. of fiber in this spin, but I was not prepared for 508 yards of fingering weight! 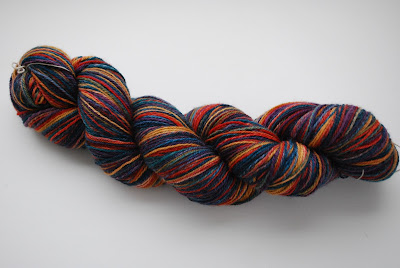 This skein was spun from half of a Blue Moon Fiber Arts Sheep to Shoe kit (8.5 oz. total, and I roughly split it in half). I split the top lengthwise into fourths and then spun each strip in succession, then chain plied the whole thing to preserve the colors. I honestly wasn't all that enthused by the colors as I was spinning, but I find they're quite improved by plying and skeining. 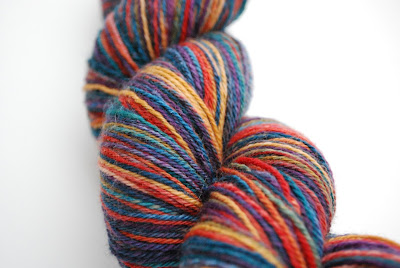 I still have the remaining half of the fiber, and I'm planning to (eventually) spin it as a traditional three ply. I'm very interested to see how the colors play together when they're not being separated by chain plying.

While this skein was in the wash, I found I wanted to keep spinning, so I got out some Southern Cross Fibre Shetland from a club shipment earlier in the year and started spinning it in much the same way. I'm already nearly halfway done with the singles. 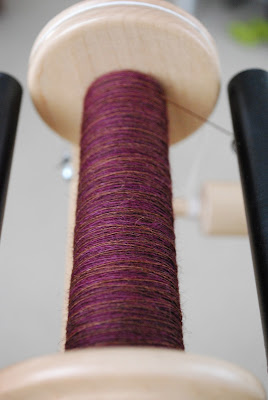 Spinning Shetland after superwash merino really makes me appreciate the differences in the fibers. This stuff is much more toothy -- it has a real grip to it when I draft it. It's also a little more hairy; the singles don't really have any sheen to them. I think this will make some pretty good sock yarn, though. I'm also not completely sold on the colors in this fiber, so I'm interested to see if I like them more after plying. I think that's one of the reasons I love spinning so much -- even when I plan out a yarn and my color handling, there's always an element of surprise.
Posted by Sarah at 8:07 PM