The first week of the Tour de Fleece is officially gone, and while I don't have a ton to show for it, there has been a lot of spinning, particularly this weekend. I had most of yesterday to myself, as the Mister and Rainbow were off at our local amusement park for the day, so I took full advantage of it. 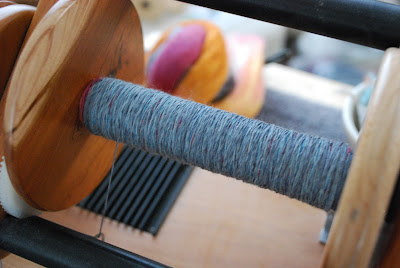 The second bobbin is the half of the fiber I did not split further, so the color repeats are much longer, and unfortunately I'm in the middle of a gray section. But you can see some of the brighter colors in the unspun fiber peeking out from behind the miniSpinner, and you can definitely see them when you look at the first bobbin. 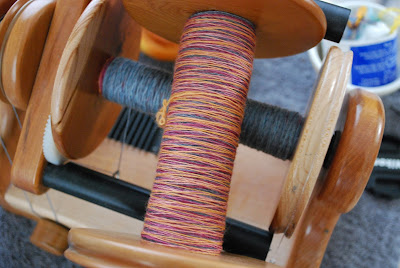 If all goes according to plan, I should have the second bobbin finished up in the next day or two and will be able to ply by mid-week.

Yesterday afternoon I once again took my Lendrum to my LYS and worked on my Sheep to Shoe kit. It's still going slowly -- in fact, I haven't even finished up the first little bump of fiber -- but the bobbin is noticeably fuller. 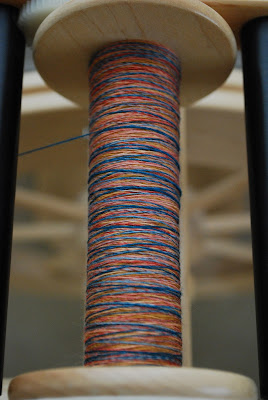 I'm still not convinced I really like this colorway, whatever it is, but I do like this interplay of colors on the bobbin that I get thanks to my WooLee Winder!
Posted by Sarah at 5:33 PM