We are now through two weeks of the Tour de Fleece, and I have a second finished skein. I've had better output in years past, but I'm still pretty satisfied with what I've gotten done over the past two weeks. 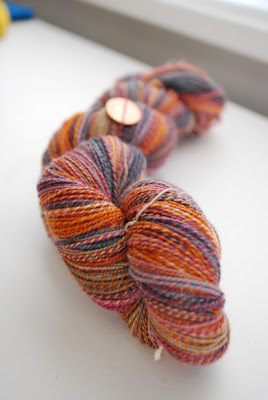 There was a lot of orange in the fiber, so I wasn't sure how I was going to feel about the finished yarn, but I surprised myself by absolutely loving it.

I've still got some superwash merino on my Lendrum, but today, while the Mister and Rainbow went to a water park with some friends, I decided to do something a little more challenging. I missed the first challenge day (and by "missed" I mean I knew it was challenge day but pretty much ignored it), and as today was the second one, it seemed an appropriate day to do something a bit outside my comfort zone.

It's been several years since my first attempt at core spinning. It's a fun technique and one that I wasn't great at the first time I tried it (as you'd expect the first time doing anything). I also had this sparkly merino blended top that I won in the Tour last year from FatCatKnits that was just begging to become corespun: 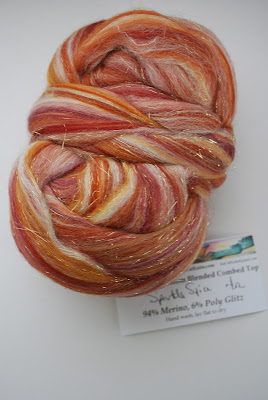 The last time around, I only had one wheel. This time, I thought the miniSpinner might actually be the better tool because I could set it to a relatively low speed that would stay constant so I could focus on what my hands are doing.

The first step was to add some twist to the core; with core spinning, there's usually no plying, so if you want your yarn to be moderately balanced, some twist needs to be added to the core that will be lost when it's wrapped. I used some leftover Knit Picks laceweight from years ago and ran it quickly through my miniSpinner and onto a bobbin. 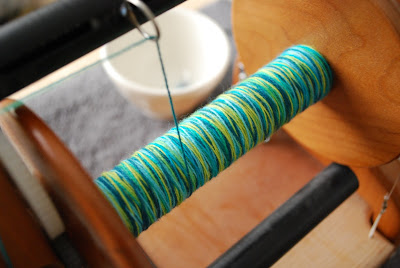 Then I prepped the fiber by splitting it into fourths and then stripping each piece into four lengths to make the fiber easier to manage and easier to draft. To core spin, you hold the fiber perpendicular to the core and allow it to wrap around the core. Here you can see what it looks like: 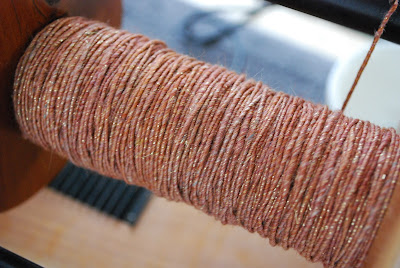 While my yarn isn't completely consistent because I clearly haven't entirely mastered the technique, I felt a lot more comfortable doing it this time around. I'm roughly halfway done and will do a little more this evening with the hope of finishing up tomorrow. Then I'll be fairly rough with the skein when I wash it in order to full the yarn a bit (that'll help the wrap stay on the core better). Now that I have a better feel for core spinning, I predict you'll be seeing it more from me!
Posted by Sarah at 6:53 PM