I never used to like July much. It was always too hot and steamy. But since I started spinning and participating in the Tour de Fleece, it's become a month I actually look forward to!

Before I get full into my TdF spinning, however, there's last week's just-finished skein to formally show you. This skein is Southern Cross Fibre organic merino in the colorway Resistance Is Futile -- an appropriate name, considering I started spinning it very shortly after it arrived. Here it is, all dry and slightly poofed up from its state fresh off the wheel: 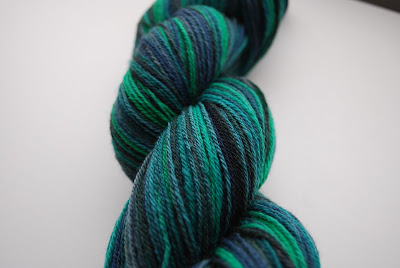 I did not get up early to get my TdF spinning started, but I did do a fair amount of it on the first day. I took my Lendrum over to my LYS in the afternoon and finished up the first bobbins of singles for my most recent FatCatKnits club shipment. This round was BFL in colors inspired by sea slugs, of all things. I spun up Molly, the brighter of the two colors, first: 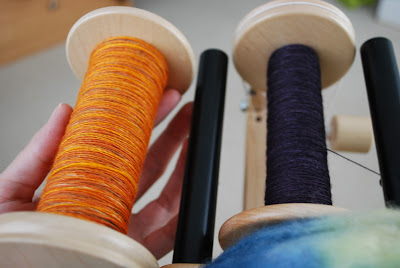 Still on the wheel is Jesse, which I started last night; I'd estimate I'm about halfway done, and I'm going to try to finish it up today so I can ply tomorrow.

What I didn't get a picture of is the other bobbin I started while at my LYS. The team there has suggested doing a BMFA Sheep to Shoe kit, and as I've had two of them in my stash for several years, I thought that was a good idea. I've had the kits so long, in fact, that I don't even know what colorways they are. I picked one, split the fiber in half (each kit is 8.5 oz.) and then split half into four strips that I'll spin in order. Naturally I'm going for sock yarn, so it's likely to take a while.

I don't have any big goals for TdF this year other than to spin as much as I can comfortably manage and to try to spin down some of the stash. I've got a serious backlog of some club fiber, so it would be great to get to some of that over the next three weeks.
Posted by Sarah at 2:36 PM