A Little Bit of Everything

After finishing all the deadline projects in May, I felt a little scattered with regard to starting new projects -- something about being free from obligations made me want to cast on about a dozen new things. But I restrained myself, mainly because there is a design project that's been patiently waiting for my attention again. I have pulled that shawl out and worked on it a bit in the last week, and I'm officially past the part where I really have to pay attention. 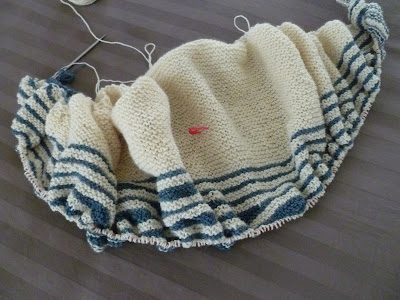 Unfortunately, it's really hard to show a crescent shawl when it's still on the needles, particularly when it gets wide enough that it's longer than the length of the circular. I've now got a bunch of rows to do in cream and then I'll pick up the blue again for the border. The rows are quite long now, but I'm also excited about this pattern again, so I have a feeling this shawl won't take me too much longer. Once this one is off the needles, I have some commercial yarn to knit another sample for the pattern, so I'm anxious to get it moving.

I'm also working on this month's pair of socks, which I started on June 1; I'm already through the gusset decreases on the first sock, and I'm just loving this colorway. 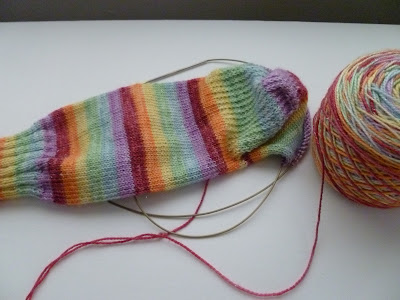 It's impossible to tell in this photo (and I blame the old point-and-shoot camera I'm using until I replace the good camera), but there are sparkles in this sock. I certainly don't feel the need for sparkles in my yarn, but it never hurts when they're there.

To curb the urge to cast on a bunch of new things, I cast on just one, and I made it a quick project. I started a dishcloth. 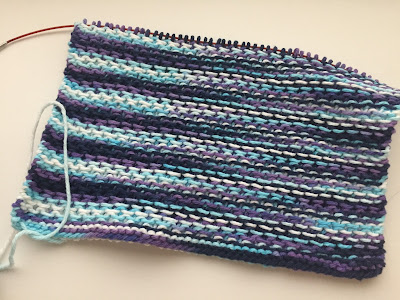 The pattern is Chinese Waves, which I knit years ago and am enjoying again this time around. This one will count toward the SSK knitalong (as well as Stash Dash), and as this skein of kitchen cotton was the last one I could find in my stash, I stocked up again at Michaels when Rainbow and I had a day of fun last Friday (she finished school with a short ceremony that morning, so we took the rest of the day to shop and relax). This pattern is very easy and I had it memorized after less than one repeat, so it should be a good one to knit several times to add to the stock of dishcloths in the house.
Posted by Sarah at 7:38 PM