I had really hoped that by the time I posted this, my Fibernymph Dye Works Falkland singles would be all plied. I had grand plans to spend the afternoon at my wheel -- but then I got a text from my boss and had to go in to work for a few hours to deal with an emergency. I ended up spending just a little more than an hour with the miniSpinner, so I'm still not done, though I'm definitely getting close. 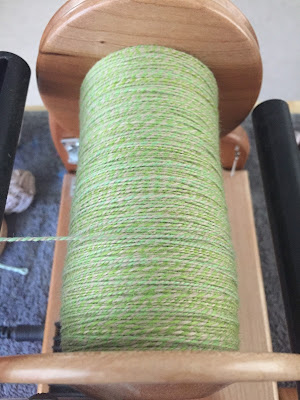 These WooLee Winder bobbins will hold somewhere in the neighborhood of eight to nine ounces, and I only had six ounces of fiber, so I know that the end is in sight. I'll sit down at the wheel again after dinner and try to get the last bit done and then likely skein and wash tomorrow.

In the meantime, I am doing the prep work I need to do to get ready for the start of the Tour de Fleece this coming Saturday. I am planning to spin at least one of the two braids of FatCatKnits Rambouillet that arrived earlier this month, but first on the wheel will be the purple Charollais from Southern Cross Fibre. I've split the 550 g of fiber into six roughly equal lengths so that I can get two skeins of three-ply yarn. 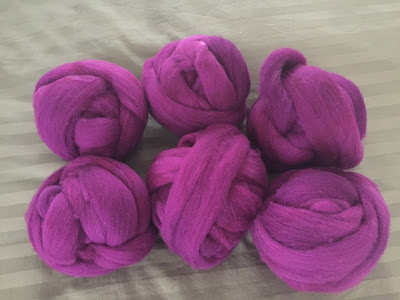 When I was spinning the original batch of SCF Charollais I received, I discovered that it spun long draw quite easily, so that's what I'm planning to do with this bath. I hope that I will be able to get through it quickly and end the Tour with, if not a sweater's quantity of fiber, at least a partial sweater's quantity. (I'm not sure if I mentioned that after I bought this clearance batch of fiber, David offered up some undyed chocolate brown Bond at an insanely good price, so 550 g of that is on its way to me and, I think, would pair nicely with this purple.)

I am not setting any outrageous goals for the Tour this year (other than to spin every day, if I can), but it would be great to get through the fiber that has recently entered the stash. I also have three projects currently on spindles, all of which have been in progress for at least a year, so I will be giving them some special attention as well. I am really looking forward to having a good excuse to spend more hours spinning!
Posted by Sarah at 6:04 PM