Spinning has happened this week. So has plying. First, there's the yarn I plied last week, which you saw before it had its bath. I'm happy to report that it was very well behaved and well balanced after finishing, and I wound up with a bit more than 440 yards -- excellent yardage in my book. 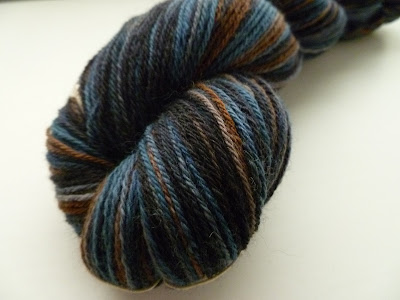 Today I finished plying up the Fibernymph Dye Works BFL that I started a couple of weeks ago (shortly after finishing the singles for the yarn above). Just like last week, I don't have final yardage for this skein, as it's still drying from its bath. But here's how it looked freshly skeined: 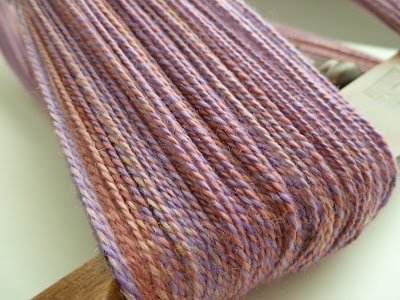 It looks all nice and well behaved here, but to give you a sense of the plying twist, here's what the skein looks like when it's removed from tension: 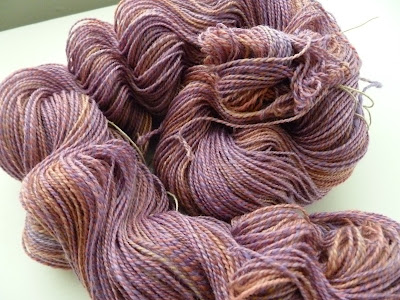 Some of that excess twist does diminish in the wash, as some of the spinning twist is reawakened when it gets wet and the snapping of the skein I do after washing evens out the twist, but there's likely to be a little bit more plying twist left in the skein even after it's dry, and frankly I'm not too bothered by that. This skein is intended to be used as sock yarn, and a little bit of extra twist is good for long-term durability. I'm pretty sure this skein will be going into the shop, but I'm going to wait until it's dry to see if I'm able to part with it.

In the meantime, as I've been catching up with spinning, there has been quite an influx of fiber into the house in the past week. First, my first shipment of the Fibernymph Dye Works Barberpole Fiber Club arrived. Lisa designed this three-month club to play up the barberpoling effect of handspun, so each shipment consists of one semisolid and one multicolor braid of fiber (three ounces of each). The first club is already (just barely) on my wheel:

I'm spinning this as another two-ply fingering(ish) weight, one ply of each color.

I also received a big pillow of fiber from Australia this week in the form of the clearance fiber I ordered from David at Southern Cross Fibre. I enjoyed spinning the club shipment of Charollais so much that I ordered another bag of it in this beautiful deep purple colorway called Hollyhock -- even prettier out of the bag, but I didn't want the fiber to explode until I was ready to spin it. 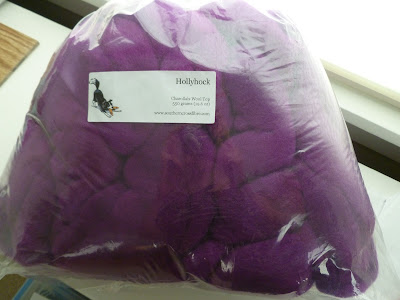 I'm hoping this will be enough for a lightweight sweater, and I might spin it for the Tour de Fleece.

Speaking of the Tour, as if all this fiber weren't enough, I also received an order I placed from FatCatKnits for two of the TdF exclusive colorways:


These are both on Rambouillet and will be a delight to spin, I'm sure. It's going to be hard to wait until the start of the Tour before I dig in to these goodies!
Posted by Sarah at 5:19 PM