This past week, I've been working on spinning up the first half of the singles for the first shipment of the Fibernymph Dye Works Barberpole Fiber Club. I started with the semisolid of the pair, figuring that it would be the less exciting of the two colors to spin. What surprised me is that it had much more depth to the color than first appeared, with tones of white and even pink appearing. I spent several hours on it yesterday so that I could finish the bobbin. 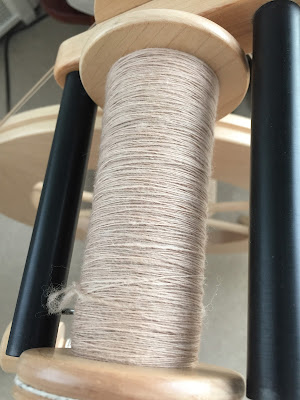 The BFL skein I finished last week has been washed and dried, and I have its final yardage. It ended up being about 366 yards, less than I hoped for but not surprising -- I always seem to get lower yardage with BFL compared to other breeds. It and the Corriedale skein from two weeks ago are now up in the shop, if you're interested. 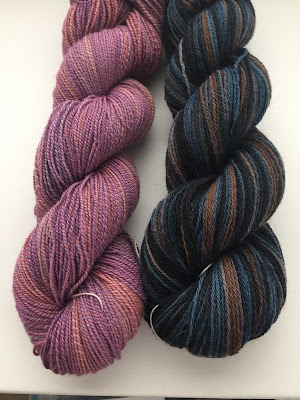 I'm posting this early because it's hot and sunny today, and temperatures are supposed to be pushing 90, so we're headed to the pool for the rest of the day. Enjoy the rest of your weekend!
Posted by Sarah at 12:20 PM