Stripes of All Types

I am, apparently, in a bit of a stripe phase at the moment. First, there are the socks I finished up  last week -- in self-striping yarn, natch. 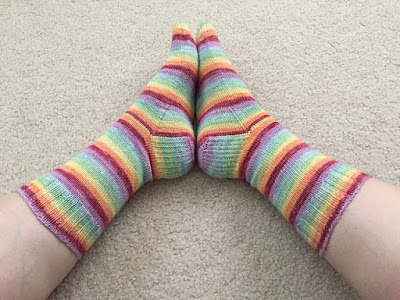 These were knit as part of the FDW S-S-S-Summertime KAL, being hosted over in the FDW Ravelry group. For each of the three summer months, there's a different focus. For June, it was stripes, so it seemed only right to cast on using this skein of yarn that was an impulse purchase last month. These aren't anything fancy, so there's not much to say about them other than the fact that I very nearly got them to match. I wasn't going to sweat it if it didn't work out (given that the striping repeat is six stripes long), but it just happened that I managed to finish the first sock in the right spot in the sequence. They aren't a perfect match, but I think they're close enough that a casual glance won't tell you otherwise.

I've also been seeing stripes in the dishcloths that I seem to have gotten addicted to knitting. 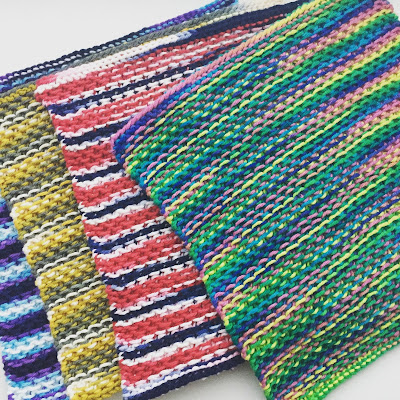 These are all the same pattern, the Chinese Waves Dishcloth, and I've been churning them out since the very end of May. I decided to knit the first one for an SSK knitalong (the designer is teaching at SSK this year), but once I started I couldn't stop. I picked up a number of skeins of cotton at Michaels several weeks ago and have been burning through them -- there's just one colored skein left after I finish the current dishcloth. I don't necessarily need a ton of dishcloths at the moment, but they're serving the purpose of busting stash, counting toward the KAL and Stash Dash, and giving me a stack of completed cloths for whenever I need some or need a quick gift (a hand-knit dishcloth with a bar of nice soap is always a good gift when you need one in a hurry). The other benefit is that it's very satisfying to finish up a project every two or three days, especially when other WIPs are larger projects. 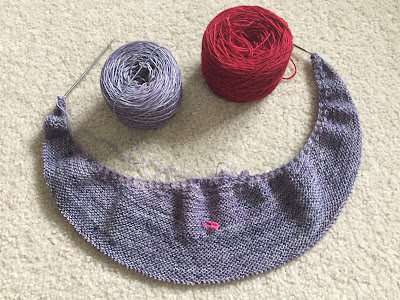 This yarn is a superwash merino singles yarn, so it's behaving quite a bit differently than my handspun, which had a firmer hand to it, but I know this will have wonderful drape when it's blocked out. These skeins have quite a bit more yardage than I had with my handspun, so I can knit the whole shawl without having to worry about running out of yarn. This shawl will be my main focus as soon as I've finished up the last of the kitchen cotton; the second sample will be photographed for the pattern, but I only need to knit up to a certain point to double-check some numbers before I can send the pattern off to my tech editor. Considering the overwhelmingly positive response the pattern has gotten already, I'm certainly anxious to get it published as soon as I can. It would also be great to be able to take the samples with me to SSK to show them off!
Posted by Sarah at 8:54 AM