Is tomorrow really the last day of June? I'm in a bit of denial, I think. After waiting for so long for the summer -- more specifically, for warm weather and longer days -- it seems like it is going by much more quickly than it should be.

Fortunately, the end of June also means that it's nearly the start of the Tour de Fleece and that SSK is coming up very soon. I am very excited about both of these events but especially about the latter. While I've had annual "knitting trips" in the form of MDSW weekends in the past, I've never attended a full-on knitting retreat, and I've certainly never gone to anything like this by myself. I'm a bit nervous, being an anxious traveler and a shy person in general, but I'm sure it's all going to be fine. I know that there will be plenty of other people there who have never been there before, and we're all going into the event with one very big thing in common -- our love of fiber arts.

On a related note, I think I completely forgot to share a bit of stash enhancement. I managed to snag one of TheKnitGirllls' seventh anniversary kits, and mine arrived about two weeks ago, I think. Included were a project bag from Twist Fiber Studio and a coordinating skein of self-striping yarn from Desert Vista Dyeworks (which I'm planning to use for my July socks) as well as some KnitGirlls-branded swag. Also included were two stickers, which were immediately claimed by Rainbow. 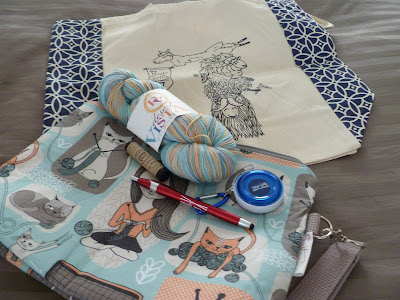 As to my knitting, I am still working on the shawl (which got a bit bigger thanks to knit night at the Steel City Fiber Collective last night) and the stack of dishcloths, which has now grown by one. I'm now in the middle of six and likely final dishcloth in this series. 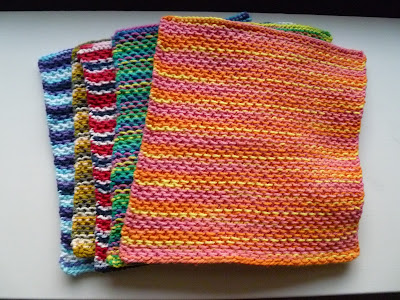 When I'm finished with this last one, the only dishcloth cotton I have left is a larger skein of plain white, and I may keep that around for swatching or waste yarn. I'm sure I also have some partial skeins of various colors in my stash, so maybe those will be turned into some scrappy cloths at some point in the future, but I think I've burned out the urge for now. I really want to focus on finishing up the shawl, and then in addition to some design work, I'm hoping to knit a summer sweater and finish it in time to take it on vacation toward the end of August. Perhaps I'm a tad optimistic, but you don't finish what you don't start, right?
Posted by Sarah at 12:30 PM