It's Always a Little Bit of Magic

Of all the finishing tools available to a knitter, blocking might be the most magical. Even years after my first experience of the magic that is blocking a piece of lace, I'm still completely amazed by how some water and pins can completely transform a piece of knitting.

Take, for instance, the handspun shawl design that finally came off my needles last week. I spent part of my day off on Friday giving it a fairly aggressive block, stretching it in all directions and securing it with a plethora of pins and blocking wires. It was beautiful even on the floor on top of some old towels, and I couldn't wait to get up on Saturday morning and unpin it. (There really is no better feeling than pulling out the pins and wires and having the knitting stay in exactly the same place, is there?) 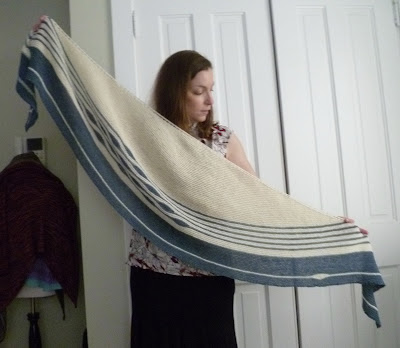 The shawl is, in a word, enormous. It is wider than my wingspan, which I never would have guessed just looking at it on the needles. Even freshly bound off, it didn't seem so large, but garter stitch will stretch quite a bit, and I took full advantage of that fact. I really couldn't be more pleased with how this turned out, and that applies to the design as well as the finished size. It really did turn out as I saw it in my head, if not better. I will get some proper pictures later in the week, but for now I have to rely on my "junior photographer" to snap some shots. 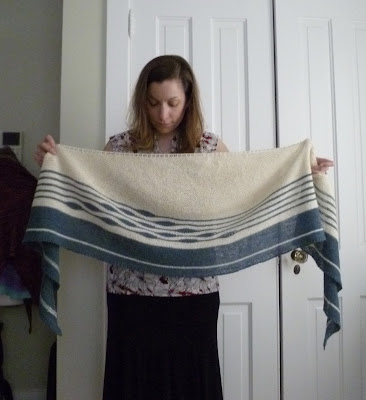 The second shawl would have been cast on already were it not for the fact that I seem to be addicted to knitting dishcloths. I finished another Chinese Waves on Sunday night and promptly cast on a third, which is already more than halfway done. 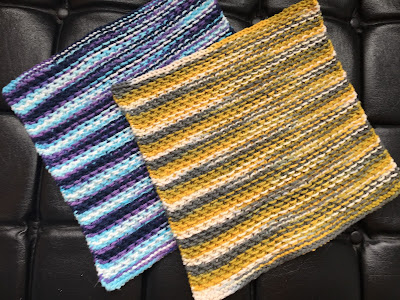 The second one was done in a colorway called Sunrise Ombre, and I quite like it. The current cloth (not pictured) is in a very patriotic red, white, and blue colorway. I have a feeling there will be more after it's done, too, particularly as I just stocked up on kitchen cotton and it's so easy and so satisfying to go through the relatively small skeins. I was very proud of myself for using just about every last inch of yarn on the second one -- I ended up with about two inches on each of the two tails at the end. I did encounter a knot in the middle of that skein and doubled up on the yarn for about 10 stitches or so, and frankly I don't think you can tell where it was unless you look really closely. I've found that it takes me maybe 3-4 hours of knitting to finish one of these (I knit a bit slower with cotton than with wool, as it's a bit hard on my hands), so theoretically if I keep one on the needles all the time, I should have a good stack of them done in a couple of weeks. At the moment I don't have a huge need for dishcloths (I primarily use them to wipe up splashes on the counters after I do the dishes, so they don't get dirty or worn out very quickly), but it's always good to have a stack on hand.
Posted by Sarah at 5:50 PM