I don't have completely final photos just yet, but look at what I finished crocheting Sunday night! 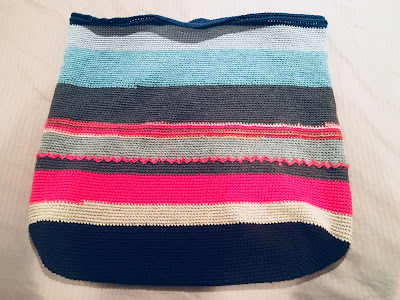 I probably should have taken measurements of the bag at this point, but in all my excitement about finishing, I completely forgot. Suffice it to say that it was large enough to be a Rainbow cozy: 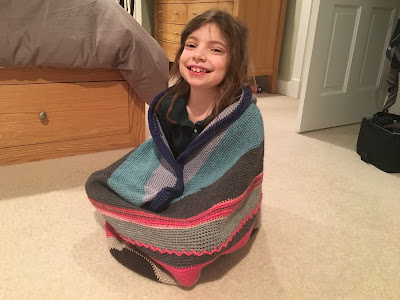 I didn't use a pattern for this and pretty much just winged it the whole way through. I started with a chain and did a round of single crochet on both sides of it, then I increased on the ends (again, winging it) until it the base seemed big enough and then carried on doing single crochet pretty much all the way up. I used a K/6.5 mm hook for most of it (it was actually an unlabeled hook that came with one of Rainbow's potholder looms) but switched over to a J/6.0 mm hook when I got to the light gray at the top to keep the bag from flaring out too much (I know it looks tapered at the top here, but I think it's an optical illusion). The whole bag is single crochet with the exception of the dark blue at the very top. In an effort to try to make the top lip a bit thicker, I did a round of double crochet and then a round of back post single crochet; if you look closely, you might be able to see it. The squiggly pink line in the middle was just me playing around, and sadly it doesn't seem to stand out much after felting. All the yarns I used were either partial skeins or single skeins of non-superwash wool leftover from other projects: Cascade 220 (solid and heathered), Ella Rae Classic, Patons Classic Wool Merino and SWS, and Knit Picks Telemark. Final yardage? More than 1,340 yards!

Oh yes, did I mention that I felted this giant thing? I wasn't sure how well felting would go given that the fabric was pretty dense already, but I figured I didn't have anything to lose by trying. Our washer very inconveniently seems to have sprung a leak over the weekend, so by default that meant I got to try felting in the dryer. It actually worked remarkably well. I got the bag soaking wet and threw it in on heavy duty with all the felted dryer balls we have. It took two cycles, but it's pretty much fully felted and it has shrunk up a lot. It's currently drying on the radiator, and as soon as it's no longer damp, I'll be sewing on the braided leather handles I won as a KAL prize last year.

With that big project done, I used my crafty time last night to swatch for my Ravellenic Games sweater. I'm going to be attempting to knit Helenium, and while I was pretty sure I knew what needle size to use, I knew swatching would be a good thing (especially considering I have more than a week until I can cast on). I'm happy to report that it worked out beautifully. 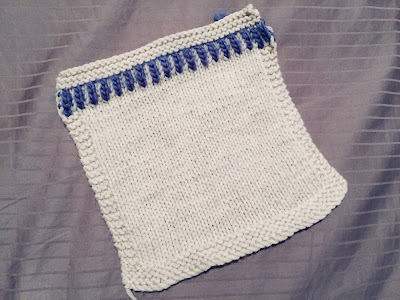 The Knit Picks Simply Wool is really nice to work with and makes extremely squishy garter stitch. I'm very nearly spot on for gauge -- stitch gauge is perfect and row gauge is off by only a quarter of a row per inch. I threw in the bit of brioche to test the colorfastness of the Chroma, and it seems to be pretty good (though I may wash the swatch again with wool wash to be sure). I will likely have to go down more more needle size for the brioche section, but I'm happy with how everything looks and am excited to cast on next week!

In the meantime, I am trying to finish up my handspun brioche cowl and will also be casting on tonight for a baby sweater. It needs to be done before the end of February, but I figure it's a good idea to get it done before the Ravellenics start and I'll be focusing all my time on getting my sweater done.
Posted by Sarah at 9:36 AM