I've still got both the handspun cowl and the crochet bag in progress, but not being done with them yet doesn't mean that I'm not already planning for the next projects. I think I mentioned last week that I'd ordered yarn from Knit Picks. It came earlier this week, and I finally got a chance to snap some photos (thanks to my lightbox, because there is no natural light happening these days when I'm actually home on a weekday). 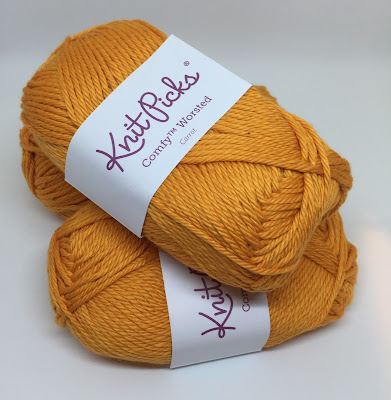 The family I'm knitting for lives in Miami, so I thought a bright color in a cotton blend would be best. They aren't finding out the sex of the baby, so I'm going to be making Hyphen, which I think is suitable for boys and girls. I'll be casting on as soon as I finish up the crochet bag.

I also ordered yarn for a sweater for me. I've had my eye on Helenium since it came out, and I finally decided that it was time to knit it. I may even attempt it for the Ravellenic Games, which seems doable considering that it's knit in worsted weight and most of it is stockinette in the round. I ordered KP's new Simply Wool Worsted, which is completely undyed and comes only in the natural colors of the sheep. Apparently it's been a popular yarn, because a bunch of colors were out of stock, so the shade I ended up with is a cream with a hint of gray called Wendy. For the brioche colorwork, I ordered a skein of Chroma Worsted in Lupine. 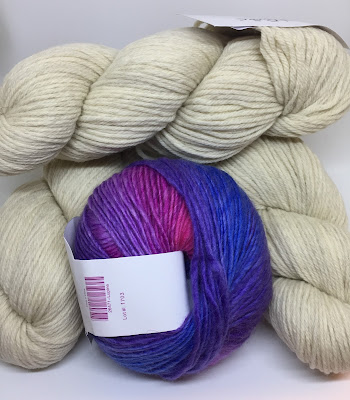 The Simply Wool reminds me a lot of Cascade 220, a yarn I have used a lot and love, so I'm sure I will love this. I'm a tad bit worried about the Chroma bleeding, so I may skein it up and give it a citric acid treatment just in case. The games don't start until February 9, so I have a couple of weeks to do that and swatch. It's been a while since I knit myself a sweater, so I'm excited to get going! That excitement should be a good motivator to finish up my current projects, too.
Posted by Sarah at 9:29 AM