The Last, the First, and a Start

I was trying very hard to finish up two Gift-a-long projects by the end of 2017, but I only managed one. And I'm thrilled with it! 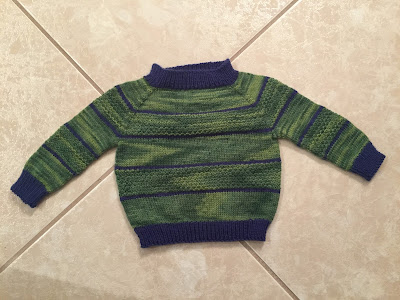 I knit this as a gift for my best friend, who just had her third son. They live in Colorado, so I made the smallest size both because it was would be fastest to knit and because the baby is likely to need a sweater right away. Even for a fingering-weight sweater, this knit up quickly, and it was an easy knit, too. I went with the two colors I used mainly because it was what I had enough of in my stash, though I completely love Triona's original idea of using a gradient set of mini skeins for the wide stripes and a solid for the thin stripes. I can see myself knitting this again one day for Rainbow (perhaps using thicker yarn to upsize it more). My only very minor complaint is that there were a lot of ends to weave in for such a small sweater, but I didn't think carrying the blue through the green sections was going to be a good idea.

I tried very hard to finish up the second project before midnight, but frankly I wasn't sure if I'd be able to stay awake that late and I probably wouldn't have finished anyway if I had, so instead I put the knitting away, went to bed, and finished up these socks yesterday, making them my first FO of 2018. 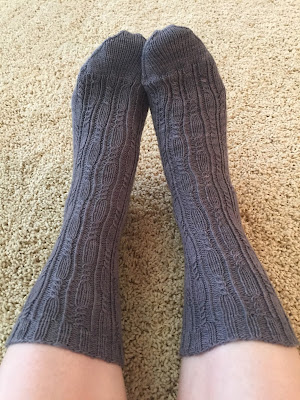 I decided to knit these up because I knew I would want another sample of the pattern to photograph for republishing when I get the rights back, and I really wanted to knit them in the kind of yarn I'd originally envisioned for the yarn -- namely a semisolid yarn with multiple plies. The multicolored singles yarn I used for the original sample was fun, but I think the cables pop much better in this pair.

I'm feeling very virtuous for using up this yarn, as it had been marinating in my stash for likely a decade or longer. I received it in a swap back then, and it was old enough that Shepherd Sock still came in a 50 g put-up and you needed to buy two to make a pair of socks.

There are a couple of projects in progress back home, and I still have Rainbow's striped socks on the needles (which will see some action a little later this afternoon, as the Mister and I are headed to a movie), but I felt the urge to cast on a new design yesterday. Unfortunately it appears that I was not counting very carefully and was short two stitches, so I had to frog last night, but I cast on again this morning and all is going well. 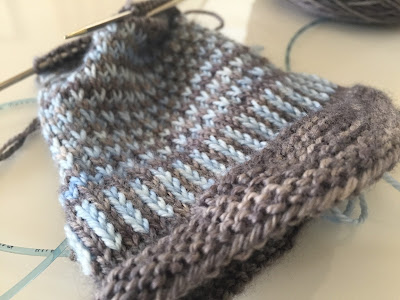 This is yet another pair of socks, this time with a bit of colorwork for fun. I'm using Fibernymph Dye Works Traveler, Lisa's sportweight base, and I just love how quickly it knits up. Combined with the fact that these are shortie/ankle socks, I think it's fair to say that they are not going to linger on the needles for very long.
Posted by Sarah at 3:54 PM