Making Up for Lost Time

Usually when I return from my December vacation, I am anxious to spend extra hours at my wheel because I've gone a couple of weeks without spinning and missed it terribly. This year was no exception. Over the past week, while there has been a fair amount of the usual knitting, I've definitely spent bonus hours at my Lendrum. Aside from just getting reacquainted after the weeks away, I've been wanting to spin more to get the yarn done for my handspun Boxy because I'm anxious to start the knitting. There's still quite a lot of spinning to do, but as of yesterday I have finished the first bobbin of skein number three, which will be an 8 oz. skein. 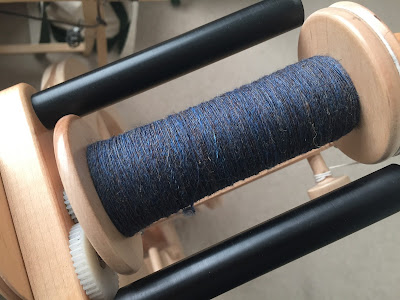 I think the entire bobbin took me four to five hours to spin, so that means I can probably get the next two done in the next two weeks if I continue my current spinning schedule. There are still two more skeins to spin after this one is done, one of which will be another 8 oz.-er, so I think if I want to get all the spinning done in a reasonable amount of time, I really need to stay focused (and that means not getting distracted by the new fiber that's arrived over the past several weeks).

Meanwhile, I finished up two knitting projects yesterday, so that means I'm ready to cast on something new -- and this something new will be my skein of fiber minis. 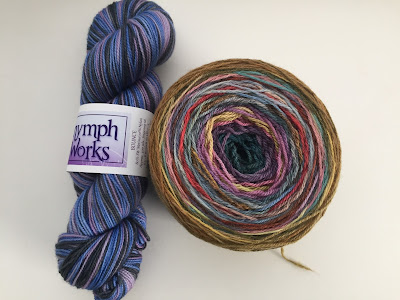 That's a standard skein of sock yarn next to it, to give you an idea of just how big it is. My plan is to knit another big brioche infinity cowl, but I'll be working on small needles so that the fabric stays dense and the cowl doesn't overwhelm me. If all goes according to plan, I will be casting on later today.

Tomorrow the entire family has off for Martin Luther King Jr. Day, and it sounds like I will be spending at least part of it teaching a friend to spin! She's already a knitter but recently started doing some needle felting and then fell down the spinning rabbit hole. She's got some supplies ordered but as I have plenty of fiber on hand, I told her to come over and play. I've also convinced her to come with me to Maryland Sheep & Wool this year, so I'm hoping to have her spinning well on her own by then so she can take full advantage of all the fiber and tools at the festival.
Posted by Sarah at 12:19 PM