And we're back home. It was a bit of an adjustment to come home to sub-freezing temperatures, but the house is nice and toasty and there are plenty of woolens here to keep us warm.

After two weeks away from my spinning, I wasted no time getting reacquainted with my wheels. As soon as I was done unpacking and getting Rainbow to bed, I sat down at my miniSpinner to add more plying twist to my Fibernymph Dye Works Holiday Countdown skein. Really, the wheel did all the work; I just held the yarn while it added twist (one of the joys of an electric wheel). I skeined it up and soaked it again on Saturday morning, and thanks to some very warm radiators, it was dry by last night. It's much better now. 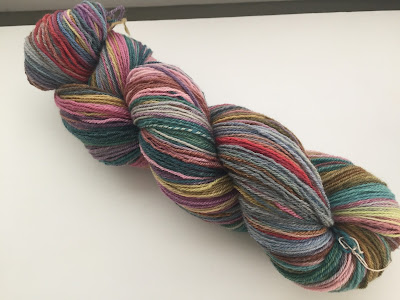 My final yardage is somewhere in the neighborhood of 605 yards, which isn't bad, especially given how much the skein shrank between finishing the first time around and adding more twist. My plan is still to knit this into another brioche infinity cowl, but I think I will likely knit it on small-ish needles so that the fabric is a bit denser and the finished object doesn't overwhelm me. I have a feeling I'll be casting on soon, just as soon as I finish a couple of things that are still in progress.

Now that we're back, I've returned to my Buoy sweater spin with the start of skein number 3. This will be a big skein -- 8 ounces of fiber -- to transition from the darkest color to the medium color. I've made just a small start thus far. 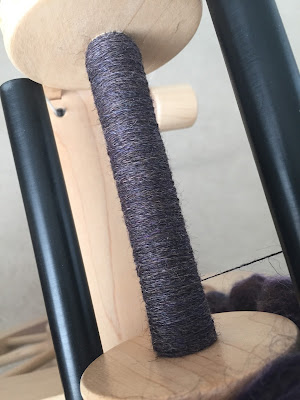 As I was splitting up fiber for this skein, I realized I made a bit of a mistake. When I bought three additional braids of fiber during my last visit to the HipStrings studio, I guess I didn't bother to look at the labels too closely. The medium color I had intended to buy was Bay, but apparently I picked up a braid of Depths, which is a very similar colorway.

I think that the colors are similar enough that I should be okay. Depths is slightly darker (the colors are overall the same except that Bay has the addition of the lighter blue), so it should work fine to combine it with Mussels. I'll just have to do some manual fading when I change from the transition skein to the all-Bay skein, which won't be a problem. I'll admit I did feel a bit silly when I realized my error -- but, honestly, is more Buoy really a problem? I think not.
Posted by Sarah at 11:41 AM