A Bit of a Finishing Spree

I'm not sure what came over me over the long weekend, but I managed to finish up two projects, both of them for Rainbow. First, there was her new brioche cowl, which I was aiming to get done in time for her to wear it skiing on Sunday. I managed that with plenty of time to spare though not much yarn -- those little snippets you see here were all that was left after binding off and weaving in the ends. 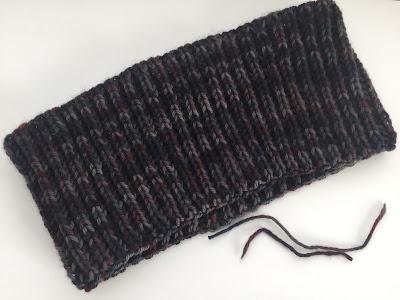 The colors are, in reality, a bit brighter than this, but I think the winter light combined with the fact that the base yarn was a dark gray make it really hard to capture them. I didn't use a pattern for this; I just cast on until I had enough stitches to comfortably fit around a 16 inch needle and then worked in brioche until I was almost out of yarn, then bound off. It turned out a bit wider and shorter than I would have liked, but Rainbow was elated by it and reported that it kept her very warm while skiing with no itchiness.

Not long after that was done, I finished up her new pair of socks -- and this time the stripes match up perfectly! 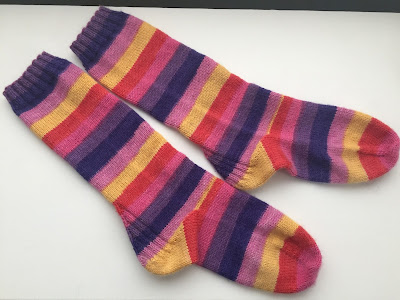 These really did not take much time at all to knit; they were started when we went to the movies on Christmas Day, but then I don't think I touched them again until the day we came home from our trip, so most of the knitting has been done during my lunch breaks the past week. I made the pattern again at Rainbow's request, and I once again made the legs rather long so that they're nearly knee socks on her. I think you could say that she likes them -- this was her reaction upon receiving them: 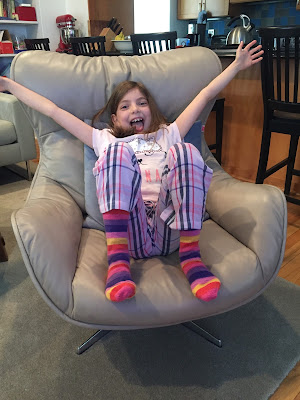 If all goes according to plan this evening, I should have another FO by my next post -- a baby hat that's already at least halfway done. I didn't bother taking an in-progress photo because with something so small all you can see is the needles poking everywhere, but this is the pattern I'm using. I'm also using all scraps and leftovers from my stash!

I did cast on one new project for me over the weekend, and it's the infinity cowl I was planning with the giant skein of handspun. I haven't gotten very far, but I like what I have. 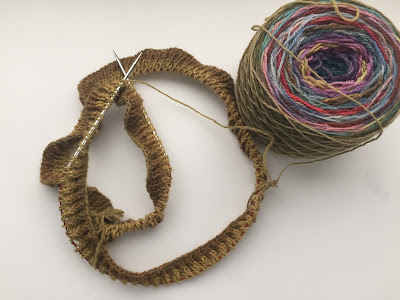 It looks like I will get some stripes, and I think the brioche stitch will help to blend the transitions really well. This is one that I'm in for the long haul; I'm working it on size 3/3.25 mm needles so as to have a relatively dense fabric and a finished cowl that's not enormous, but that means I have 250 stitches on the needles, so even one round take a bit of time. The good news is that this is simple enough that I can pick it up and knit a bit on it whenever the mood strikes without having to think too much.
Posted by Sarah at 5:30 PM