Knitting continues on my two WIPs and they don't look much different from the last time you saw them (though the body of my Humulus is now about three inches away from the ribbing at the bottom), but I've put them aside for the moment to knit a quick baby gift. I can't remember the exact due date of the baby in question, though I believe it's later this month. Regardless, I didn't want to be scrambling to whip something up right after the baby arrives, so I figured I'd cast on now and make quick work of it. I pulled everything out and got started at about 9 p.m. last night, so this is about an hour's worth of knitting. 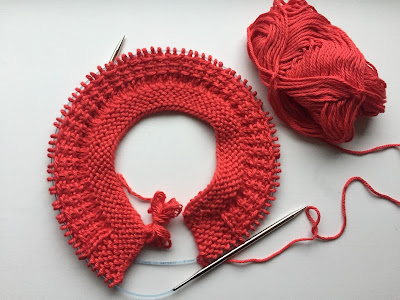 This is the Hyphen pattern by Lisa Chemery, which may look familiar because I knit it earlier this year for another baby gift. I'm using some very deep stash Knit Picks Shine Worsted -- and by very deep stash, I mean that it's been in my stash for more than a decade now. I think I originally bought about eight skeins of it but used three a number of years ago for another baby gift. I'm making the smallest size of this sweater, which calls for 275 yards, so that should use up most of what's left.

The color here isn't completely accurate due to the dim light this morning. The colorway is called Watermelon, and it's a really deep bright pink. It seems to be a discontinued colorway, so I can't even link you over to the KP site for a better picture. Suffice it to say that it's a little less orange that it appears here.

This yarn isn't my favorite, mainly because it's a bit slippery and has such low yardage per ball (75 yards per 50 g), but it works well for this purpose -- and it was sort of free, as it was already in the stash. I think the sweater will be adorable, and that's really what counts.
Posted by Sarah at 9:08 AM