After a beautiful, warm weekend, we've been plunged back into winter here in Western Pennsylvania. I walked to work in a snow squall this morning, and while it's nice to have another excuse to wear my woolies, it feels a bit like torture after Mother Nature has teased us with some truly lovely weather (not to mention that it's really depressing to see all the spring flowers drooping under the weight of snow).

At least with this cold snap it no longer feels so ridiculous to be knitting a colorwork sweater! After neglecting my Humulus for several days to work on the baby sweater (and then doing a lot of spinning over the weekend), I picked it up again Sunday night and am now extremely close to starting the ribbing at the bottom of the body. 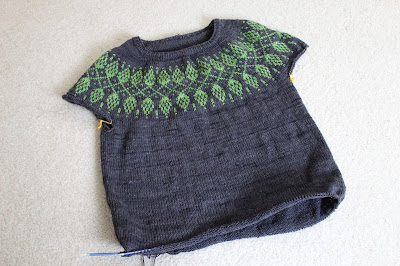 When I started this project, I'd hoped to get it done by the end of April, but I'm not sure if that'll actually happen. I'm sure the sleeves will go quickly, but there is still the baby sweater to finish -- and as the baby is due in less than two weeks, I really do need to get a move on!

Late last week, I finished the yoke and put the sleeve stitches on holders, so I'm on to the fast part of the body. I know it won't take long to finish this, but it's so tempting to keep knitting on my sweater instead. If I can be really focused and productive and get both sweaters done by the end of next week, I'll be very happy. 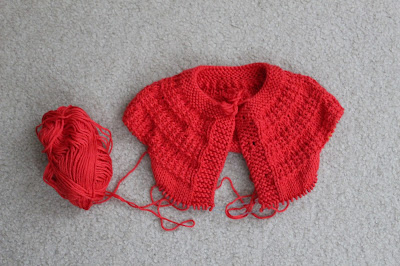 I'm also still working on the Mister's socks, which really haven't been any sort of priority and have only seen action during my lunch break knitting. But I'm in the home stretch now, having just turned the heel of the second sock. I have reached the boredom stage with them at this point, so they're a bit of a slog. At least they require a minimum level of attention!
Posted by Sarah at 5:33 PM