After finally finishing my sweater spin last weekend, I wasn't quite ready to be done spinning my default yarn, so I pulled out some of the fiber from my first HipStrings Synergy Club shipment. This fiber is a really interesting blend of Merino wool, Zwartbles wool, Tussah silk, and sari silk. Though the Merino was originally in three shades, blended with the Zwartbles and the silk, it has a brownish gray look to it. Every so often, though, there's a pop of bright color from the sari silk. It's really quite lovely. 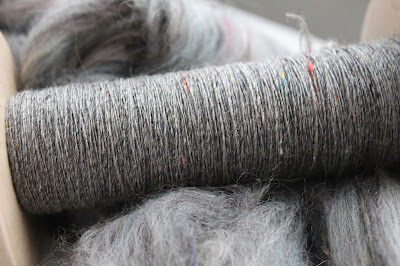 I finished up the first bobbin yesterday, after spinning most of the singles on Friday night, and it was quite a surprise to look at it yesterday morning and see all those colors that I just couldn't see at all when I was spinning in the evening.

I very nearly started the second bobbin straight away, but I thought that before I did, I should try to challenge myself a bit. I had purchased an ounce of dyed cotton on a whim from Jill when she had her Small Business Saturday sale last November, and I actually tried to spin it last weekend with no success. I got some really great advice from some folks in the HipStrings Ravelry group, though, including from Jill herself, so I decided to give it another go. This time went much better! 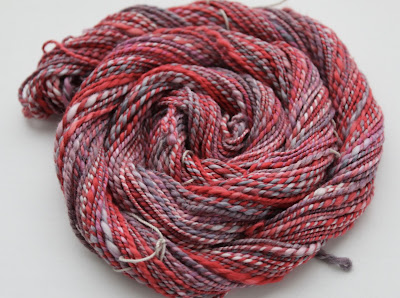 It's very irregular, has some pigtails and corkscrews, and it's not particularly balanced, but it's cotton! That I spun on my wheel! I didn't end up with very much yarn, maybe only 60-70 yards, but it's a start. I found it difficult to spin and a little hard on my hands (probably because I was not spinning it optimally), but I did definitely get into a groove toward the end. I can't say that I'm a total convert to spinning cotton now, but I'm proud of myself for not giving up after a disastrous first try. I always think it's good to stretch yourself as a spinner (as any sort of crafter, really) -- but I think that for the time being, at least, I'll probably stick to wool.
Posted by Sarah at 2:32 PM