The Theme Is Stockinette

I am in a very stockinette place right now. Considering how busy life has been the past several weeks, it's not entirely a bad place to be. For me, stockinette is soothing because it is mindless and repetitive. I know that last week, after very long and very mentally arduous days at work, it was such a balm to be able to sit down with my knitting and just knit in the round for an hour or two.

The main stockinette project at the moment is my Humulus. Though I'll be the first to admit that the body isn't as stimulating as the colorwork yoke, I am still very much enjoying knitting this, and I like seeing the small variations in color and fabric density in the fabric I am creating. 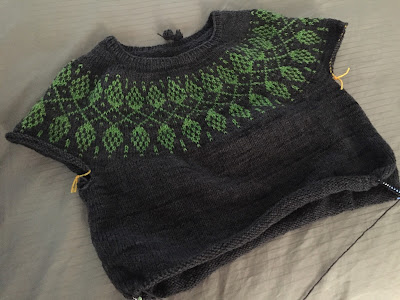 I believe I'm about halfway down the body at this point, if not a little more, and I can get a couple of inches knit in a good evening of knitting, so I expect that body will be finished before too long. I'm now alternating my second and third skeins of the main color and have enough remaining on both that I'm confident I will finish the body before they run out. That could mean that I will end up with an extra skein of yarn -- and that means more Buoy to play with once the sweater is done!

The other stockinette project is the socks I've been knitting for the Mister. Even though his feet are only about an inch longer than mine, they seem so much longer, so there's a lot of stockinette. I finished the first one last night and weighed it and the leftover yarn, and it looks like I should just barely be able to squeak out the second sock from what I have left. I'm glad I decided on a shorter leg!


Soon I'll be knitting something other than stockinette in the round, as it's just hit me that we're already a third of the way through the month of April and I have some baby gift knitting to do -- our neighbors are expecting a little girl, and I believe she's due to arrive later this month. I've had this bright watermelon pink Knit Picks Shine Worsted in my stash for years (I only used three skeins of it for another baby gift several years ago) and think it will be perfect for a spring/summer baby. 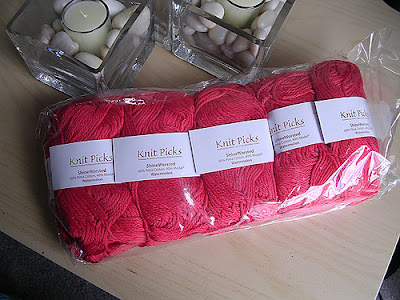 I'm planning to knit another Hyphen, this time in the smallest size, as I know it knits up quickly and adorably. It will be the first of several additional sweaters from the pattern, as Rainbow's next sweater will be one in the largest size and I'll also be making a miniature one for her American Girl doll. And all of these will be some shade of pink. If I get sick of it halfway through the second one, I have only myself to blame.
Posted by Sarah at 4:19 PM