Zen and the Art of Spinning Wheel Maintenance

Spinning is incredibly relaxing for me. I've even been known to nod off while spinning if I happen to be a little tired because I get so in the zone. But my main wheel, my Lendrum, is now about a decade old, and in the past few months, it's developed an annoying squeak that has been decidedly not relaxing. The best I could tell was that the squeak was coming from somewhere near the treadles, where there isn't anything that can be oiled or lubricated, so it seemed like a good time to replace some connectors.

While in theory this replacement is an easy process, in practice it required some unusual tools and some extra muscle. I enlisted the Mister in helping, and between the two of us, we managed to replace both footman connectors. 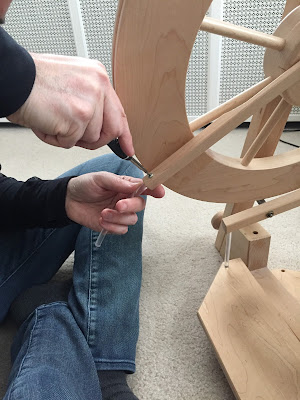 I also replaced my drive band, which was yellowed and very stretched out. Want to see just how much these little pieces of plastic change over a decade? Here's a connector we removed (top) and a new one (bottom): 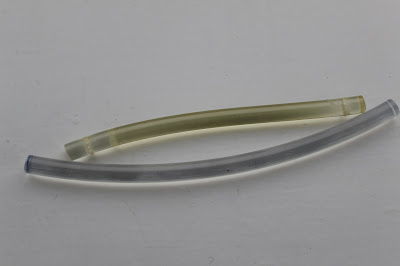 The new one is actually clear; it only appears gray due to the light. But you can see a big difference. The wheel is now all put back together and without a squeak to be heard.

And what is on the wheel? 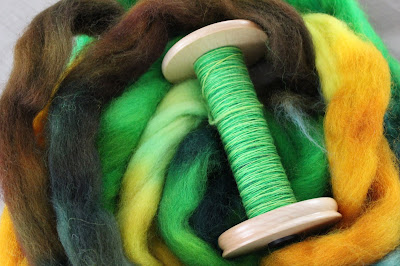 This is Spelau (a Norwegian wool) dyed by David of Southern Cross Fibre and sent as last September's club shipment, so it's been in the stash for about half a year. I'm spinning up a three-ply fingering weight for socks, but to try to get those bright colors to be a little more evenly distributed, after I split the fiber into thirds horizontally, I split each section in half vertically and I'm spinning the two halves in the same order. It's spinning up quickly and easily, and of course it's always a bit of zen to spin my default yarn.
Posted by Sarah at 3:16 PM