A Time of Reflection

If you follow me on social media or Ravelry or pretty much anywhere else online, then you likely noticed that I was very quiet yesterday. That's because yesterday was Yom Kippur, an annual holiday that encourages us to reflect on how we live our lives and the impact we have on others and on the world around us. It's also a day for fasting, meaning from the conclusion of dinner on Tuesday until dinner last night, I didn't eat or drink anything. That makes for a necessarily calm day, as I typically have very little energy to do much once we get home from services, and yesterday I had a pounding headache from dehydration all day. I did spend a little time at my wheel yesterday afternoon (because I couldn't really think clearly enough to knit and follow a pattern), and as usual that time was very meditative more me -- and also very relaxing, as I found myself nodding off more than once.

Now that I am more or less back to normal and can think more clearly, I'm reflecting a bit on my crafting and reading life this year and how those aspects can have an impact beyond just being pleasurable ways to spend my time. 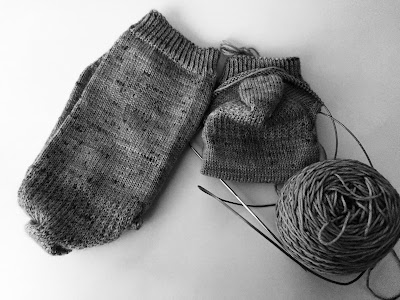 I am about 75% done with my final secret obligation project, with the hope that it will be all done by the end of the week, and I've realized that as much as I enjoy the creative aspect of designing, I really do not enjoy having to do it on a deadline. Putting aside the fact that these secret projects for third-party publishers make it really difficult to keep up with the blob, I've found that the pressure I've felt to get these things done has meant that in my free time, when I should be doing things with my family, I've instead been focused on knitting. While I can knit while I do other things, I've been so focused on the deadlines that I've largely been isolating myself to get the work done. So once these deadlines have passed, I will be making a better effort to spend that free time in the company of my daughter and husband (even if I'm knitting while we're together).

My reading has seen a major uptick in activity this past year, thanks in large part to my embrace of the e-book. While the increase in volume/number of books read is a good thing for me, what's more notable is that I've been making a real effort over the past year or so to read books by or about people who come from a very different background. Specifically, I've been trying to read more books written by or about people of color in an effort to broaden my perspective and, in a way, experience different points of view of what it is like to live one's life. While the books I've read have been predominantly fiction (because that's my preferred genre), I've also read a fair amount of nonfiction books, many of them featuring women as a primary focus. Since I last posted about my reading, here are some of the books that I've finished:
I'm currently reading only one book, The Night Circus, another one I missed when everyone else was reading it, and I expect that I'll finish it today. That's good, because I just got notice from the library that The Woman Who Smashed Codes is now ready for me!
Posted by Sarah at 2:51 PM