All my life, I've been a doodler. I did it in the margins of my class notes when I was school; I do it now when I'm in meetings at work. Part of it stems from not being able to sit still, but part of it is also because the creative side of my brain almost never shuts up. More recently, my doodles have taken the form of stranded colorwork knitting patterns. I sit down at a computer with a charting program and see what I can come up with. Sometimes it looks great on the screen but terrible when knit. Sometimes, though, I get lucky and end up with something that translates beautifully from computer screen to yarn.

The pattern I've released today started out its life as one of those doodles. I wasn't trying to get the pattern to look like anything in particular when I first sketched it; I was just seeing how the pattern developed as I went along. It ended up not only looking good as a knit pattern, but it's also a very beginner-friendly colorwork pattern, as the repeats are short and there aren't any long floats. I call this pattern Emblematic because, when knit, the colorwork motif looked a little to me like a heraldic shield or emblem -- not to mention that nothing screams "warm hat" more than one with a thick doubled brim and a band of colorwork for extra warmth. 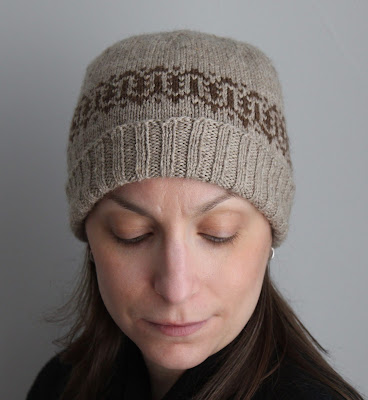 The yarn I've used in the sample is a familiar one to me: Shetland Sport from the Ross Farm. This stuff is fantastic if you're a fan of woolly wools. It's minimally processed and completely undyed, so what you're seeing here is the natural color of the sheep (and the sheep are Marigold and Nassau, if you're curious). This yarn is by far the softest Shetland I've ever used, and it blooms beautifully when you wash it the first time. An added benefit of working with a minimally processed wool is that there's still some lanolin left in it, so your hands get nice and soft while you knit! 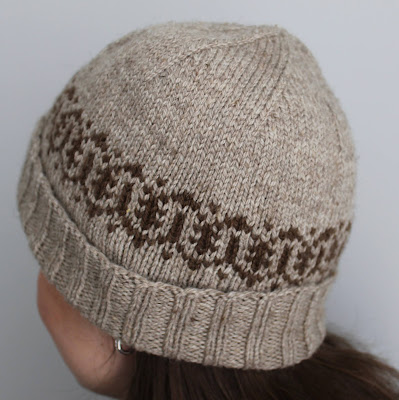 The hat is available in three sizes, from child to adult large, and uses about 170-240 yds./155-220 m total of the two colors of yarn. The Ross Farm Shetland Sport is on the heavy side of sport, so you could also use a DK-weight yarn. I had two skeins of the Shetland Sport and make this hat for me and another hat (with colors reversed) for Rainbow, and I still had some leftover. I won't say that I'm ready for the cold weather to come, but at least the two of us are prepared with cozy new hats!