Remember the shawl in progress I showed you in my last post? Well, shortly after hitting publish, I realized that I really didn't like how it was knitting up. I'd run into a bit of a design problem, on top of which I realized that if I kept going, the mini skeins toward the end of the shawl were going to have very, very thin stripes. Plus, I wanted a bit more mixing between the colors. So after dinner and putting Rainbow to bed, I yanked the needles out and frogged the whole thing. I know that will make some of you gasp, but when you design, you get used to frogging -- it's just part of the process. I had a better idea to get these minis to shine, so I cast on the next morning for iteration number two, and I'm liking this much better. 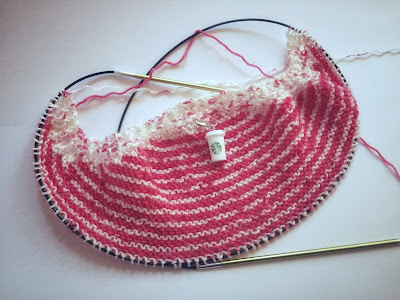 I'm using a technique I "unvented" for this that is sort of like intarsia but requires no twisting of strands or bobbins and is easier to maintain an even tension. My plan is to create distinct sections using two minis, a semisolid and its coordinating speckle-dyed, at a time, and if this small beginning is to be believed, the finished shawl should end up close to half-circle shape than the traditional crescent. I'd originally hoped to have this shawl done and ready to be published by mid-October, but now that I've started over, I may have to push it back a bit. The nice thing is that because I'm self-publishing, I can totally change my own deadline!

Meanwhile, I'm still working on Rainbow's Hyphen cardigan, and it's coming along nicely. Last night I finished up the final textured section of the yoke and knit most of the quasi-raglan increases (they're only on the body for this size). I have about four rows left to knit before I split the sleeves from the body. I had her try it on (as best she could) this morning so I could make sure that the fit was okay. 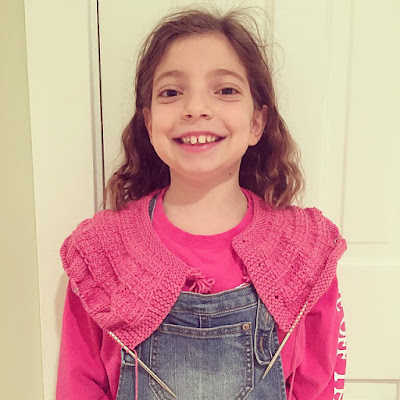 I'd say she's pretty happy with it, wouldn't you? My plan is to complete the body first, to the length that she deems good enough, and then knit the arms as long as I can before my yarn runs out. I have less yarn than specified in the pattern, but I have a feeling that the requirements are likely padded a little and my skeins also weighed a bit heavy, so I might be okay. But Rainbow has made it clear that she'd rather have a long body and slightly shortened sleeves than full sleeves and a slightly cropped body. And for this, she's the boss!
Posted by Sarah at 2:51 PM