A Touch of Twist

It has been a restful weekend -- and certainly a happier one than last weekend. I had hoped to get more spinning done over the past couple of days, but after giving blood on Friday, I found I just didn't have much energy. I sat down at my wheel on Friday night as I usually do but had to call it quits after about an hour; my legs just couldn't treadle anymore. So unfortunately I don't have a finished third bobbin of singles for my combo spin as I'd hoped, but I did at least get a bit of time with my spinning. 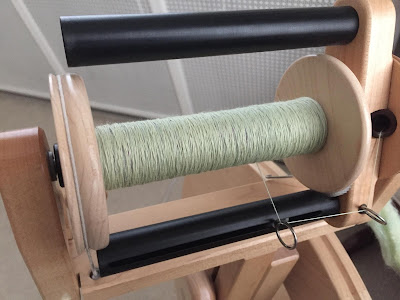 This third colorway is very much the wild card in the combo spin, as it is more unlike the other two than they are compared to each other. It has some of the same pink/purple that the other two braids have, but it also has this light sea foam green and some tan. I'm going to try to put in some more spinning time during the week with the hope that I can finish up this last bobbin of singles and be able to ply next weekend. Next weekend, at least, there will be plenty of time for crafting: I'm having oral surgery (for the third time) on Friday morning, so there's not much I can do for the rest of the day but rest. Although that will mean having an ice pack to my face off and on all day, I'm hoping I can MacGuyver something to hold it in place and keep my hands free to knit or spin.
Posted by Sarah at 8:04 PM