I am still chugging away on the Mister's Neighborly Cardigan, though the right front isn't much different from the left, so I'll spare you another photo until there's been significant progress. Instead, today I want to talk about a long-awaited update to an experiment that began roughly five and a half years ago (yes, I verified the date because it did not seem like that long!).

For those of you who are reading who weren't around back then, a refresher: Back in 2013, Sarah Anderson's The Spinner's Book of Yarn Design came out and was much discussed in the Ravelry spinning community. One of the ply structures she discussed in this book was an opposing ply yarn -- in other words, a multi-ply yarn with one ply spun in the same direction as the ply -- that was supposed to create a more durable yarn and knit fabric. I was intrigued by this idea and decided to do an experiment with a pair of socks, one knit with a traditional three-ply yarn and one with an opposing ply yarn, with both skeins spun from the same fiber and knit the same to keep all the other variables consistent. I used some Corriedale pencil roving from the now-defunct Crown Mountain Farms and spun up my two skeins, one for each sock: 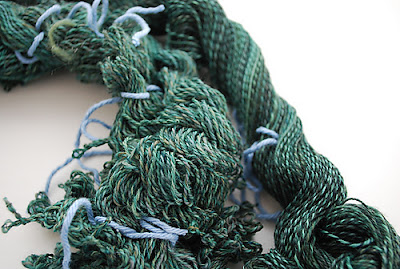 This photo was taken before the skeins were washed, so you can see that both have active ply twist, but I think it's fairly obvious which skein was the one with the opposing ply.

After finishing the yarn, I knit up the socks, which were identical save for adding some cable twists to the ribbing of sock knit with the opposing ply skein so I could tell them apart. 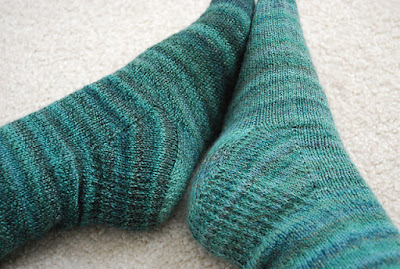 The next stage of the experiment took a bit longer. I wore the socks regularly for the next five years. I didn't pay attention to which foot which sock was on when I wore them (one foot is a bit more calloused than the other) and didn't treat them any differently than my other hand-knit socks. They were probably worn about once a month during sock season and handwashed after wearing. When I was wearing them last week, Rainbow noticed that they were finally showing signs of wear. So at last I have some results to share! 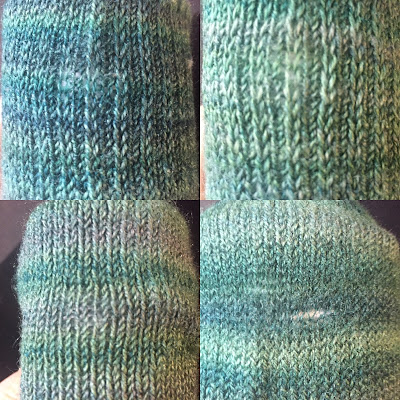 Here you can see thinning on the heel flaps (top photos) and under the ball of my foot (bottom photos), where I usually wear out my socks. You can see that the wear is pretty much the same on the heel, but it's noticeably worse on the bottom of the foot on the sock on the right -- and that's the traditional three ply sock.

I'm not convinced that opposing ply sock yarn is inherently more hardy than a traditional three ply, especially as both of these socks are showing wear, but it's at least clear that it doesn't hurt to have the added twist of an opposing ply. I think nylon content is probably better at preventing wear, as I have some very sturdy generic wool/nylon socks (knit from yarn like Regia) that are a decade or more old and aren't showing any signs of their age other than some fuzzing. Ultimately, given that socks probably get the most vigorous wear of any item of knit clothing, I expect them to wear out, but it's good to know that there is an option that might help a little. Is is worth the pain of dealing with extra-twisty yarn? That remains to be seen.
Posted by Sarah at 6:48 PM