This week, the "two" refers to the two sweater WIPs, both of which are still in progress and not likely to be done anytime soon. But there has been some forward movement.

For one thing, I finished the back of the Mister's Neighborly Cardigan on Sunday evening, right down to weaving in ends from joining in new skeins (the little yarn butterflies you see are reserved for seaming). 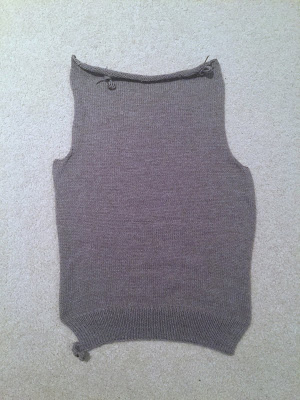 This is decidedly the most boring piece of the sweater, so I'm glad to have it finished up. I plan to start knitting the first of the front pieces tonight. The fronts at least have cables on them, so the knitting should be a little more engaging.

Meanwhile, I've added a handful of rows to my Floozy and have finished the very fun spiky section: 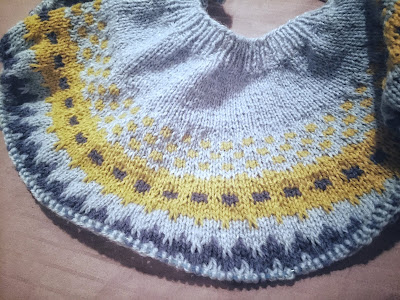 Please forgive the quality of the photo, but it's the best I can do when it's as gray outside as it has been. I think you can still see the stitches, which is what's important. The way this effect is achieved is really quite ingenious, but I don't want to give away the secret sauce by telling you how it's done. It's certainly the slowest part of the colorwork, so I'm glad that it's finished.

I've actually got one more WIP on the needles as of yesterday, a second sock for a pair that was started as a pattern submission that didn't make the cut (and thus is now with my tech editor for self-publishing), but there's not much to see just yet, so I'll share when it's done.

Because my WIPs aren't terribly exciting at this point, let's talk about reading! I've finished quite a few books since I last posted about what I'm reading, but I'm just going to highlight a handful of the best.
Goodreads tells me that I've read 64 books so far this year, which is just bonkers considering that my initial goal was 25 and that was a step up from last year. Three cheers for the library and ebooks!
Posted by Sarah at 9:18 AM