Well hello there! It's been a little longer than I intended thanks to the Thanksgiving long weekend. I meant to put up a post on Thursday, but I was busy with cooking and baking and just never got around to it. And that's really okay.

Today's spinning post is full of spoilers that some of you might not want to see, so if you've got a Fibernymph Dye Works Merry Month of Minis fiber collection and don't want to know what it contains, now's the time to close this post! So that you won't inadvertently see a spoiler, I'll start out with some information that I meant to post on Thursday.

If you're on Ravelry and do holiday gift crafting, then you've likely heard about the Indie Design Gift-a-long. This is the event's sixth year, and I'm once again participating as both a designer and a moderator (you'll find me in the KAL/CAL thread for feet and legs). Through this coming Thursday, all 349 participating designers have between 10 and 20 of their designs collected in a special bundle and on sale for 25% off using the coupon code giftalong2018. You can use the code as many times at you like. Then, you can participate in the knitalongs/crochetalongs to get your holiday crafting done and have a chance to win some prizes. You'll find my bundle, containing 20 of my patterns, here; these patterns are on sale this week, but all of my patterns (and all participating designer patterns) are eligible for the KALs, and all paid patterns are eligible to win prizes.

Now that we've gotten that out of the way, let's talk spinning, shall we?

The Merry Month of Minis collection this year has 31 minis, but because we'll be away at the end of December, I decided I wanted to start in on them early in order to get them all spun up before we leave. So I started spinning last week, and I've gotten through all of a dozen so far and done part of my 13th mini. I thought it would be easiest to show you in some collages.


Finally, the mini in progress is Citrus Grove on Polwarth: 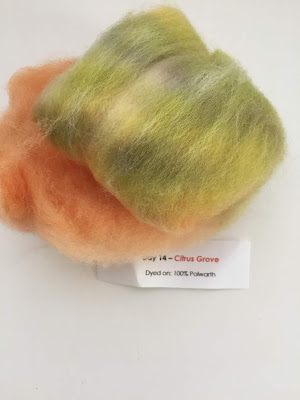 I've actually skipped one mini, and that was Day 13, which was Karakul. The color is beautiful, but it's not a wool I enjoy spinning, so I left it out. 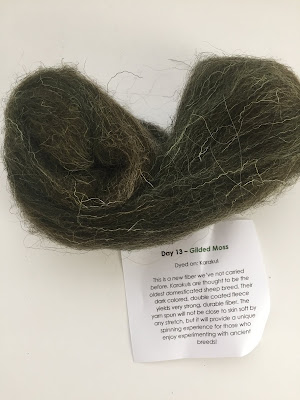 My first bobbin is filling up nicely, if I do say so: 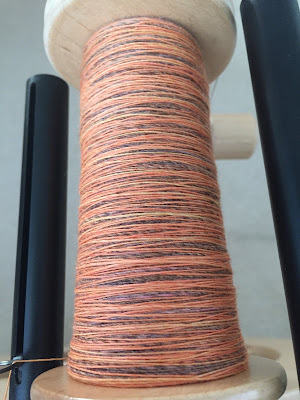 I imagine that I'll use a good amount of a second bobbin when all is said and done. As with last year, I plan to chain-ply all the singles I spin, though I anticipate having a slightly thicker yarn this year because I'm spinning a lot faster and thus not taking the time to make sure my singles are very fine. It'll be a surprise no matter what I come up with!
Posted by Sarah at 4:12 PM