... that I will actually finish the Mister's sweater in time! Though I ended up working on it less than I should have over the holiday long weekend, I did get started on the left front, which, I have to say, was a lot more entertaining than the back due to the simple inclusion of one cable and a bit of ribbing. I am apparently very easily amused. 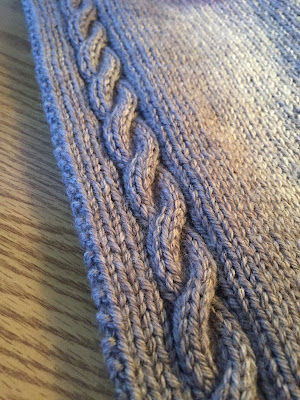 I have worked on this here and there, including during my lunch breaks and during a conference call this morning at work. And all those little bits added up enough that I finished the piece just before the end of lunch today. I even won at yarn chicken! 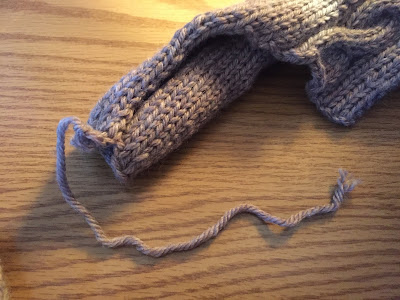 I usually prefer a longer tail than this, but this is long enough to weave in securely, and I have a long enough tail at each of the shoulders on the back that I can use those for seaming. I'm just grateful that I did not have to join a new ball of yarn just to knit the last couple of rows.

I haven't touched my own sweater in more than a week, and I think by now I've pretty much accepted that it won't be done in time for the Cardigan Party. But I can always take it with us to Florida, where knitting time will be plentiful.

In the meantime, I cast on a new mindless project in order to have something to knit on at the movies last Wednesday night (we have a long tradition with some family friends of going to dinner and the movies together the night before Thanksgiving) and at the theater this past Saturday. I figured I might as well dig into the newest stash enhancements, so I pulled out one of the skeins that was purchased at Indie Knit & Spin a couple of weeks ago and started a Sockhead Slouch Hat for Rainbow. I've only knit on it during those two excursions, and it's already pretty far along. 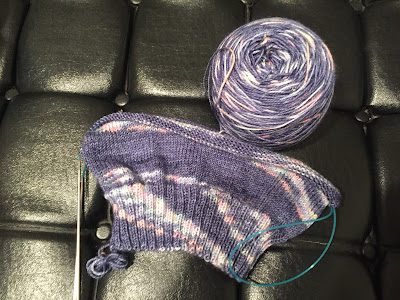 I discovered after the movie that apparently I cannot accurately count to 2 while knitting in the dark, so I had some mistakes to fix (nothing that a Handi Tool couldn't fix!). The ribbing is, you will notice, about half the length that it should be, and that's because Rainbow decided that it was long enough. That was just fine with me, as I'm much faster just knitting stockinette in the round. I'll be trying it on her periodically so she can also tell me when the total length is long enough (I expect it'll be a lot less slouchy than the pattern specifies). This yarn comes in a very generous skein, so I expect I will have a good amount of leftovers to play with when I'm done -- unless I can convince her she needs a very large pompom, of course.
Posted by Sarah at 6:00 PM