A Decade in the Making

Typically, I'm not the kind of knitter who lets projects linger in an unfinished state. There was that one sweater that took me a year to finish, but it was an anomaly (and, in my defense, it was a rather large sweater worked in laceweight yarn). While I'm not strictly a monogamous knitter, I do regularly work through my projects and finish them. Perhaps that makes this project and its completion so much sweeter. 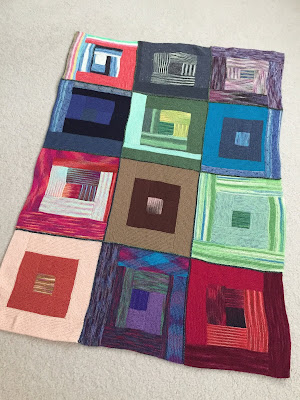 I started the squares for this blanket when I was newly pregnant with Rainbow, on May 20, 2009. I had a lot of sock yarn scraps sitting around and thought they would be good for a baby blanket, seeing as sock yarn is generally pretty reliable if thrown into the washer and dryer frequently. But after working through all my washable leftovers and even some more scraps that a friend sent me, I was left with 11 squares that got put away when Rainbow arrived and my crafting time and attention span greatly diminished.

Over the years, I've thought about this blanket a lot. As Rainbow got older, I figured that I'd need to make a lot more squares for it to be big enough to accommodate her, and I guess the idea of all that extra work put me off pulling it out. But as my bag of sock yarn leftovers was overflowing, this summer I decided it was time. And it turns out that there wasn't that much extra work left to do: When I pulled out all the squares that were done and laid them out on the floor for Rainbow to see, she decided that the one additional square was all that was needed. So I finished the square, we dug through my stash to find something good to do the seaming with (we settled on a partial skein of some handspun superwash merino), and I started connecting the squares. While I was unwell over the weekend, Rainbow and I binge-watched some Great British Baking Show episodes while I worked. By the end of the day, the blanket was done. And I had one ecstatic 9-year-old on my hands. 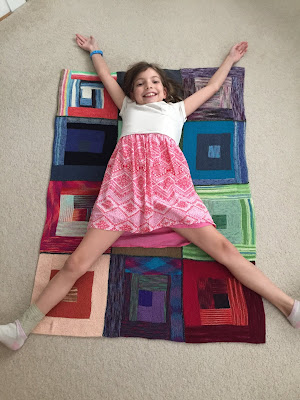 She's now obviously bigger than the blanket, but this is the size she likes -- and she's been curling up with it every night since I finished. She loves to wrap it around her shoulders while she reads in bed, too.

I didn't follow a pattern for these squares but instead just followed the basic method for making log cabin squares. I tried to keep the squares more or less in the same color family, but obviously I didn't stick with that the whole way through. Rainbow really likes how eclectic it is, and I love looking at it and seeing a record of many of the socks I've knit over the years. I can see remnants from socks from the Rockin' Sock Club, from socks I knit for family members, even from a monkey I made as a gift.

Amazingly, even after sitting in storage for a decade, I found only one hole in one square (clearly someone had chewed through it). I darned it and frankly it's imperceptible unless you look on the wrong side for the darn. I imagine that there will be more holes to darn in the years to come, and frankly I think it only adds to the charm.

The squares were joined using single crochet, with the wrong sides held together so that the ridge from the join is on the right side. I thought it would feel odd on the wrong side, and I also like that it gives a framing effect to the squares.

As to the finished dimensions, it's a bit hard to tell, as it's all wrinkly from use. But properly blocked, the squares are about a square foot each, so the finished blanket is roughly 36 inches by 48 inches Had I been more meticulous as I was knitting it, I could have calculated how much yarn I used a bit more accurately, but I didn't, so I had to weigh the finished blanket and make a general guess. It weighs 584 grams, so given that the average sock yarn is about 400 yards per 100 grams, that means I used about 2,336 yards (or 2,136 meters for Stash Dash). I know I've knit a lot of socks over the years, but to have that much in leftovers really says it!

I won't say I will never knit a sock yarn blanket again, and certainly I've already started crocheting one, but I will say that I won't let another project linger for a decade as a WIP. I think that in spite of the long wait, it's probably better that I finished it when Rainbow was a bit older, as she more fully appreciates it now. And nothing makes me happier than finishing off a big project and seeing it really and truly loved.
Posted by Sarah at 9:29 AM