The calendar might say that it's still summer, but all the signs that fall is coming are there. Sign number one: Today is Rainbow's first day of school. 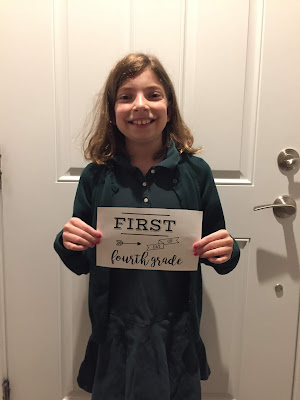 After four straight days of sunshine, cooler temperatures, and low humidity, today it is dark and rainy, so we had to settle for an indoor photo in bad lighting. I think she was a little nervous to start but also excited; thankfully it's a half day to start off the year, so I'll be picking her up in a little more than three hours and she'll have the afternoon to play.

Because of this odd start to the school year, I took yesterday and today off from work, giving me an extra-long weekend. I had hoped that would mean lots of extra knitting time, but as the Mister left early Saturday morning to go to a trade show for work, I've actually been rather busy with Rainbow. Still, it's been enough to make a decent dent in my Rhinebeck sweater knitting, and I'm very happy with how it's progressing. 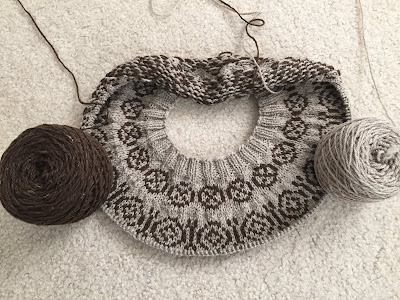 I'm also happy to report that the fit seems to be good. I spent most of my knitting time last night after putting Rainbow to bed knitting and tinking one round of colorwork; I was planning a third band of motifs after this one, but it looks like the individual motifs won't end up centered under the previous two even though they work with the stitch count, and various things I tried last night didn't make the situation any better. Luckily, because I ran out of time before I got too far along, my brain had some time to sit with the problem, and I've come up with a solution that I think will work perfectly. I'll still have to tink back a round, but that's no big deal. With the beginning of September coming and the weather getting better for sweaters, I'm anxious to get this off the needles!

Sock weather will be here soon, too, and I'm trying to get my current pair finished before the end of the month. I did manage to finish up the first sock on Saturday before the end of Stash Dash, and it got me over the 10K finish line. 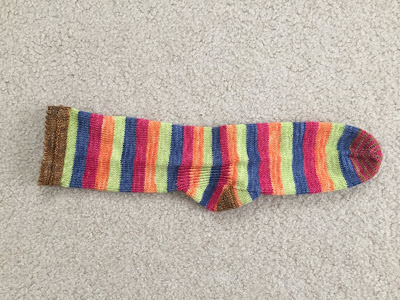 I'm pretty happy with the gusset changes, though I'll have to judge the fit after I've had a chance to wear the socks for a while. I didn't do the toe entirely in the contrast color because the mini skein was getting a bit light and I wanted to be sure I had enough for the second sock, so I worked two-round stripes. To be honest, I think I actually like it more!

While I hunker down with the knitting this week, I am also trying to finish up some books. At this point, with less than a week left in Summer Book Bingo, I'd say my chances of completing a cover-all are slim to none. But I'm hoping to at least complete two to three more squares. I'm more than halfway through Middlemarch, and I've been listening to Emma for my Classic square (it's been a number of years since I read it last, and I've found that listening to the audiobook at 1.25x speed is perfectly fine and makes it go a lot faster). I'm planning to head to the library this morning to try to read a hard copy of Fox 8 for my Non-human protagonist square; I've had a hold on the ebook from the library for more than a month, I think, and it's estimating I still have at least a two-week wait, which is ridiculous for a book that's so short. I think if I can be at the library when it opens this morning and can find the book easily, I can probably read it in one sitting before it's time to pick Rainbow up from school at noon. And if I can round out the summer with only one or two empty spots on my bingo card, I'll be very satisfied!
Posted by Sarah at 8:58 AM