Though fall is getting closer -- the days are starting to get shorter, the mornings a little cooler -- we're still in summer for a while yet. I'm not the kind of knitter who gives up working on larger projects in the summer (I'm always cold in the air conditioning anyway), but when I take my knitting out and about on warmer days, I do find that I prefer something small and light. That usually means a sock. And this summer, I've been all about the shortie/ankle socks.

When I finished Rainbow's Little Boxy earlier this year, I had a fair amount of yarn leftover, so I thought I'd use at least some of it to make her some ankle socks and use them as an excuse to try out a stitch pattern I'd been playing with. As soon as I finished them, she promptly put them on and wore them every evening until I had to steal them to wash them, so I knew they were a hit. And I knew I'd also need to reknit them for proper pattern photos and in something other than semisolid yarn so I could make sure the stitch pattern looked okay. And also so I'd have my own pair. 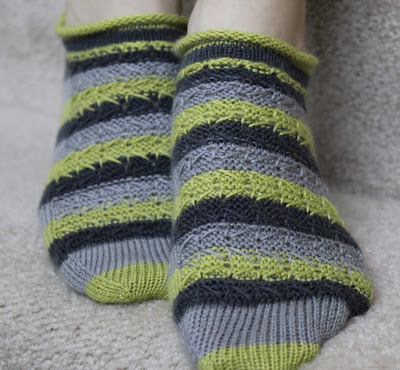 I have to admit that I'm rather shamelessly fond of these socks. The stitch pattern looks complicated but isn't, and something about that texture makes these so much more addictive than self-striping yarn on its own. Of course, you don't need to use self-striping yarn for these -- the stitch pattern looks nice in solid, semisolid, and variegated as well.

If you followed my progress on this second pair on Instagram, you'll know that I had a hard time coming up with a name for them. For me, naming my designs is the hardest part of the process. I had the same issue when I was a teenager and did a lot of creative writing: Coming up with a title was always the thing I struggled with most. I asked for suggestions on IG and in my Ravelry group, but nothing really struck me as the right name. I wanted something that was a little onomatopoeic, something that was fun to say as well as somewhat descriptive of the pattern itself. And then, over the weekend, it suddenly hit me.

If Wikipedia is to be believed, a schuss is a straight downhill on skis at high speed. It's sometimes also called a schussboom (isn't that a great word?), and apparently it was also the name of the first Olympics mascot. I thought it was perfect for these socks because in addition to the fact that they are a very fast knit, the stitch pattern reminds me a bit of the marks on the snow left behind by skis. Also, how awesome would it be to shout "SchussBOOM!" when you finish a pair? 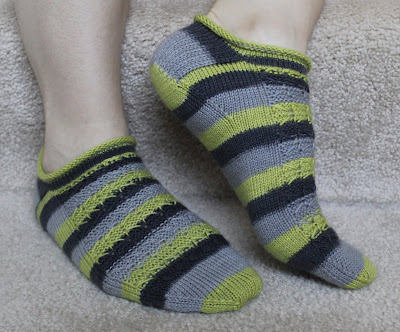 These socks are essentially a heel, a foot and a toe. They use a traditional heel flap and gusset, but I've moved the gusset decreases so that they fall on the bottom of the foot and hug the heel. The stitch pattern is both written out and charted, and the pattern is graded to five sizes so you can knit these shorties for the whole family. This sample was knit using Knit Picks Felici, and though I did use two separate skeins so I could get the stripes to match on this pair, I used 49 g to fit my large feet, so if you have smaller feet, you could easily get a pair out of one skein (I'm planning to use my leftovers to make Rainbow another pair of anklets). Any fingering weight yarn will work, and to make these even faster, I've knit them up at a larger gauge than normal: 8 stitches per inch. As always, the pattern has been tech edited to ensure an easy-to-understand, error-free pattern.