And That's Why I Have Electric Wheels

I had such grand plans for this weekend. We had next to nothing planned, so I thought I would get tons of crafting in. And it started out fairly well: I got up early yesterday morning and went for a 3.3 mile run. Shortly after I got back, though, I started feeling not right. And since then I've spent the majority of the weekend on my bed, feeling helpless. I'm not exactly sure what's up with me, though I suspect a flair-up of a chronic condition (isn't getting older fun?). I'm just feeling very weak and worn out, so I haven't had much energy. Today going grocery shopping wore me out so much that I had to take a nap.

I'm thankful that if I had to feel under the weather, it's at least happened at a time when I didn't have to miss out on anything or try to grin and bear it. I'm a little sad that it meant that I did not have the energy to do as much spinning done as I had hoped. I was still okay to spin a bit on Friday night, and I managed to finish up the second bag of fiber bundles in my big Polwarth spin. The second bobbin is getting much closer to being full! 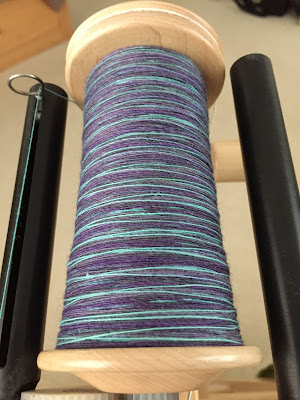 First thing this morning I had enough energy to a tiny bit of plying, so I put the Electric Eel Nano through its plying paces with the singles I'd spun last week. I haven't washed the skein to set the twist yet, but I'm happy with how it looks. 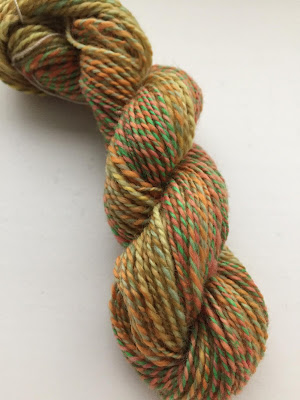 The colors aren't really my thing, but this was freebie fiber and I spun it just to test out the wheel, so I'm not too worried. I think there are still plenty of adjustments I could make to the wheel, but I have to say that I am pretty impressed with what it can do given the circumstances. And on a day like today, when I don't have the energy to treadle, it's good to have an electric wheel!
Posted by Sarah at 4:19 PM