Despite a similarly crazy schedule to last week, that knitting ennui has been replaced this week by a desire to start All The Projects. I guess fall (aka Prime Knitting Season) must be just around the corner!

I am still working diligently on my Rhinebeck sweater and am about 8 inches into the body; I joined my second skein of yarn last night. No photo because it looks the same, just a bit bigger.

I did finish up that blanket square over the weekend, and Rainbow has declared it to be the last one, so now it's time to seam all the squares together. We took a good dig through the stash the other day and came up with this leftover partial skein of handspun sock yarn, and I'm crossing my fingers that it'll be enough. 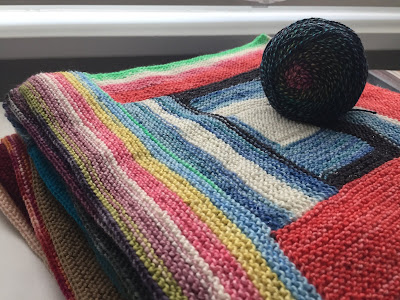 I am just planning to crochet the squares together and not add any border, so it should be a fairly straightforward process, as least in theory. I still have to have Rainbow decide on a layout for me so I can have some semblance of a plan.

Meanwhile, I seem to have started another sock yarn blanket without noticing. 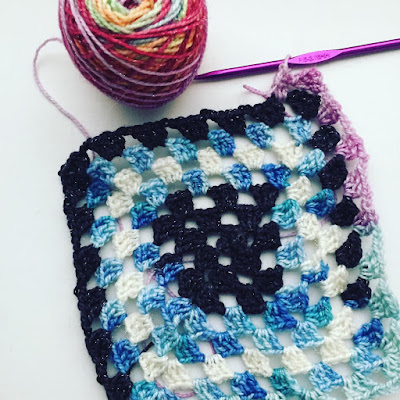 Rainbow's been wanting to expand her crochet skills (you may remember that she taught herself single and double crochet earlier this year for a school project), and I'd promised I'd teach her how to do a granny square. The easiest way to do it was to crochet one alongside her, and, well, it's addictive. I still have a big bag of Fibernymph Dye Works leftovers that I thought I'd be using in more blanket squares, and then I came across a couple more partial skeins in the dig for seaming yarn, so it looks like I'll be busy with this for a while.

Though I haven't cast on yet, I am itching to start yet another new project, this time for charity knitting. Last week I ripped out an old sweater to reclaim the (non-superwash) yarn to make some Snow Day Mittens, and I washed it and wound it into cakes so it'd be ready. 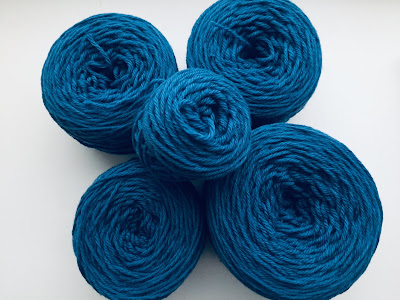 I've got roughly 830 yards of this to play with, and lots of scraps of superwash to use for the cuffs, so I should be able to make quite a few pairs of mittens.

Finally, I've got my lunchtime/on-the-go knitting, and it's socks (surprise, surprise). I'm using the yarn from the first shipment of the FDW Just Desserts club, and as the colorway was named Summer Fruit Tarte, I couldn't not use the contrasting mini skein (appropriately crust colored) to make a crust-like cuff. 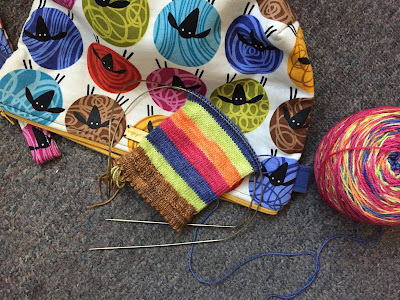 It looks like I'll have a lot to keep me busy if the weather this weekend forces me indoors!
Posted by Sarah at 2:12 PM