This was the weekend I really needed, one I would like to have every week, to be honest, but one that I really especially needed after a busy workweek.

Friday nights we usually have Shabbat dinner at my parents', but this weekend they are away getting the new house in Florida into shape (have I mentioned that when they took Rainbow down over her spring break in March, they bought a new one?). So instead we went to a family "cookout" (it ended up being indoors due to rain) at our synagogue, and we were home on the earlier side, so we all were able to relax a bit before bed, me at my spinning wheel, Rainbow with a book, the Mister with his various electronics.

Yesterday, I went for a run first thing, before I lost my nerve and before it got too hot. I've been training all summer for the two 5K races that the Mister and I typically run in the fall at the end of September/beginning of October, and I've slowly been building up my endurance. Last week, I managed to go for 2.1 miles before I took a walk break. This week, I felt really good, so I thought I'd just keep going until I felt like I had to stop -- and I managed to make it 3.15 miles! I walked a bit and added on an additional tenth of a mile to make it an even three and a quarter, but I'm super psyched to have managed more than a 5K at this point in the year. I still have to repeat it, but I am feeling good.

After I had breakfast and cleaned up, we all walked to a local farmers market nearby (about another two miles round trip) and picked up some fresh basil, cherry tomatoes, eggplant, and cherries as well as a freshly baked loaf of sourdough. We had a quiet evening at home with "snacks" for dinner -- including the bread, the cherries, and the tomatoes -- and Rainbow and I made a batch of pesto with the basil we'd bought and some from our herb pot outside. It felt really good to get into bed last night, and if you need a visual representation of why, well, here you are: 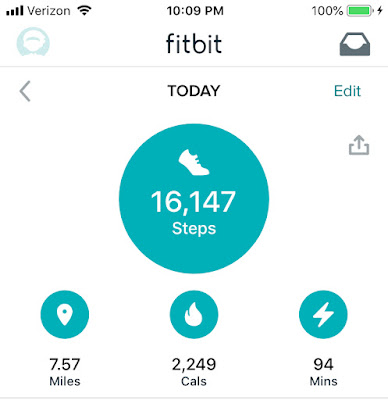 My legs were tired -- and that doesn't even count all the treadling I did at my wheel yesterday! This weekend was the kickoff of Camp Spin 15, and I managed about an hour and a half both yesterday and today. I'm trying to spin up as much of the Polwarth I started during Tour de Fleece as I can, and I'd estimate I'm about halfway through the second bobbin. 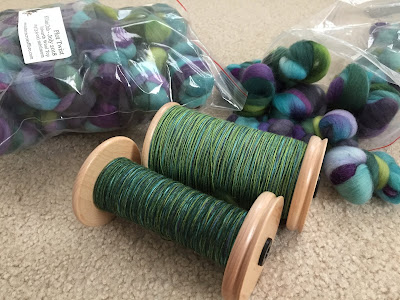 When I started the project, I had two full bags of the fiber bundles plus about half a bag with the overflow. I've now got about one and a third bags, so I can tell that I'm making progress even if the bobbin seems slow to fill. Camp continues for two more days, and while I don't think I'll finish all of the singles in that time, I may just finish up this bag of fiber. My goal is to complete the singles and ply all the yarn before the end of Stash Dash -- mainly because doing that would rack up a heck of a lot of meters toward my total!

The best part of the weekend, however, was something that was expected but still a surprise: My nephew has finally been born! After getting to the hospital at about 11 Friday night and laboring all day yesterday, my sister-in-law gave birth at about 9:40 last night, and today we got to go and meet him. I know I'm rather biased, but I think he's absolutely adorable! 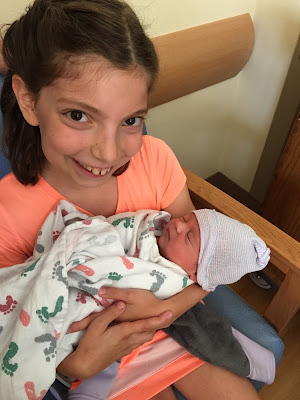 Rainbow is, quite obviously, in love with her cousin. She said after we'd left that she wished she could have stayed with him all day to cuddle him! I'm hoping that even though he ended up being a bigger baby (8 lbs. 9 oz.!) he'll still fit into the sweater I knit him earlier this summer. I'm planning some additional baby knits soon, and I'll likely err on side of making a larger size. The new family of three is expecting to go home on Tuesday, and we plan to take them dinner sometime this week, so you can expect more cute baby pictures in the near future!
Posted by Sarah at 4:42 PM