The Start of Knitting Season

This week has started off with weather that always kicks off a case of cast-on-itis in me. The weekend was cooler (good for running, but not so good for staying warm, prompting me to reach for wool sweaters and socks), and yesterday it rained pretty much all day. Today started out still very overcast and gloomy, so I am sitting here curled up in one of my favorite sweaters (Ravelry link) with my knitting by my side. After a very busy workweek last week, this week is, I'm hoping, going to be much quieter, which should translate to a lot of knitting and reading time.

I'd hoped to have more progress on my sweater by now, but I've pretty much put it aside for the time being in favor of a more urgent project. I got back my new sock pattern from my tech editor yesterday, and I've been working on a new sample pair to take photos to go with it. Rainbow conveniently agreed to allow me to knit that new pair for her (ha!), and as fast as the original pair for me was, knitting a 56-stitch sock in sport weight is even faster. I cast on the first sock Saturday afternoon and finished it last night. 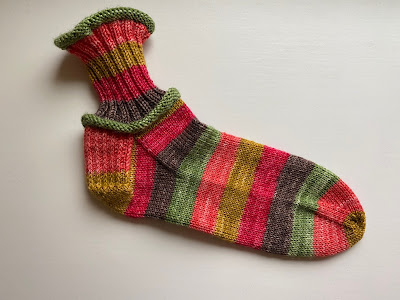 Technically I only need one sock to take pattern pictures, but I've already cast on the second and will be working on it anyway -- it's a good project to work on while reading. I am hoping to be able to publish the pattern later this week.

My Hitchhiker also distracted me from my sweater at the end of last week, and it's grown enough that the purple is just starting to change to a slightly darker shade, though it's a little hard to see in this lighting: 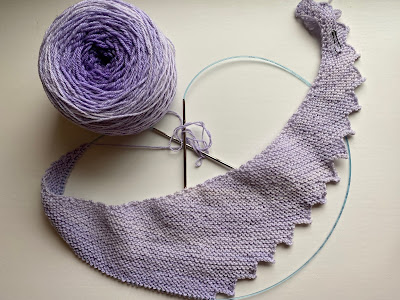 As I predicted, Rainbow saw this and heavily hinted that she'd like it when it's done. I really don't want to give this up, though, so I reminded her that we bought a sparkly purple skein of yarn when the Steel City Fiber Collective was closing a few years ago that would suit her very well, and she agreed that it would be perfect. So it looks like there will be another purple Hitchhiker on my needles in the near future.

The first of my not-Rhinebeck purchases showed up yesterday, which was incredibly fast! This is the only yarn I purchased, a mini skein set from Murky Depths Dyeworks. 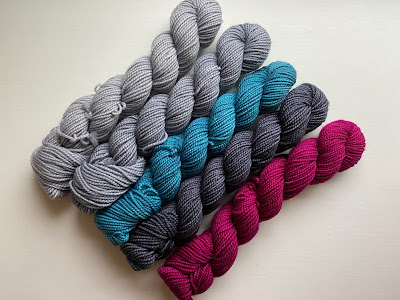 That the yarn is beautiful and made it here in record time is great enough, but I was really touched by a message I received from Debbie, the dyer, shortly after I placed my order. She sent me a message thanking me for my order and for supporting her shop but noted that she would have much rather seen my smiling face in person. Isn't that lovely? I know not all people in the yarn and fiber world are inherently good, but there are some who are truly excellent, and I feel better for knowing them.