As promised, I have not one but TWO finished skeins of handspun to share this week! I did two quick and dirty spins of some Southern Cross Fibre as part of my effort to plow through older stash. First was a mystery, a bag of fiber that was a prize from Tour de Fleece 2015 (yes, 2015). Not even David knew what the fiber was, and I was clueless as well. All I can tell you is that it was soft! I split it into thirds and did a traditional three ply with it that ended up worsted weight-ish. 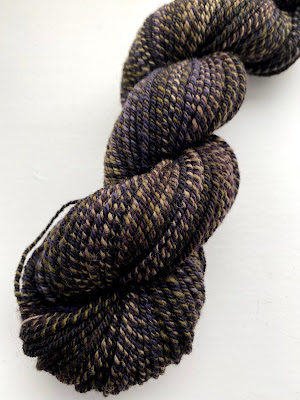 The color isn't quite accurate here; it's a bit blown out. This photo of it on the niddy noddy, before washing, is a more accurate representation: 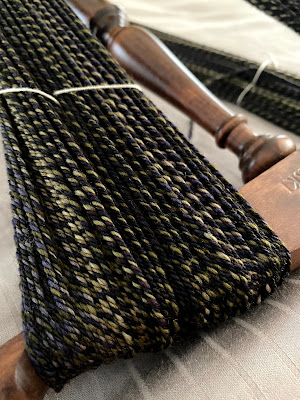 After washing and drying, the skein measured about 140 yards, so it's pretty dense, but that was expected.

Next, I turned to some South African Superfine in a colorway called Fragonard, one of several in a short series that David did inspired by artists. I will admit up front that I never really cared for this colorway, but I also don't care much for Fragonard's art. Still, South African Superfine is lovely stuff to spin. I tried to spin my singles a bit finer and ended up with a slightly thinner yarn (somewhere in the range of sport to DK weight): 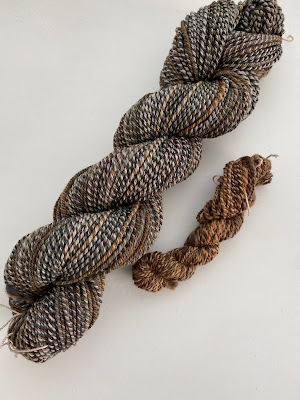 Here's a closer view of the big skein, which ended up very marled. 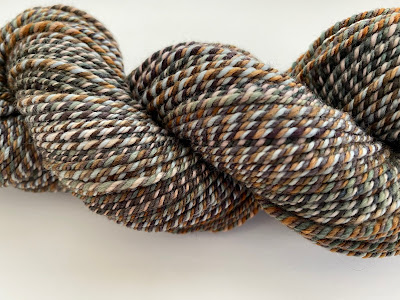 Though I certainly didn't plan it, it occurs to me now that these two skeins might go together very well!

Up next are the other two artist-inspired colorways, Caravaggio (on Corriedale) on the left and Kandinsky (on Rambouillet) on the right: 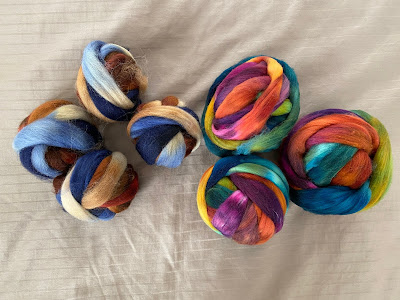 As you can see, I've split both colorways up lengthwise. The Corriedale split easily into quarters, but the Rambo was a little more temperamental and split into three strips that aren't very even. My plan for both is to spin one bobbin of singles, spinning the strips sequentially, and then chain plying. I've already got Caravaggio on the wheel with the hope that it will become sock yarn (it is Socktober, after all!). These are two colorways I like, so I really want to preserve the colors as much as possible. I don't think I'll have these done by next weekend, but at least I'll have some in-progress shots to show by then!