I'm joining with Carole and friends for Three on Thursday today, which is just perfect for the three WIPs I have that I didn't mention yesterday.

First, there are the socks I'm knitting for my mother for her holiday gift this year. You saw the yarn last week, and I mentioned that I was going to try something with some slipped stitches. I got about half an inch into the leg and decided that I couldn't really see the slipped stitches, so I ripped back to the end of the ribbing and decided to do a plain stockinette sock. As it turned out, the yarn behaved so beautifully that it was the right choice. 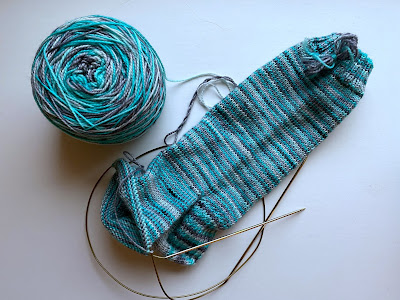 There's a tiny bit of pooling in the gusset (which is finished now), but the stitch count and gauge combination worked out such that there's almost a micro striping effect. I'm really pleased, and I think my mother will be, too. The one variation I've made to my plain sock recipe is to use what I've come to think of as an inverted gusset (the method I used in these socks). It requires a little extra attention on my part, but I think it's worth it for the cozy fit.

I've been picking up my Hitchhiker here and there, and it's now grown to 20 points (soon to be 21 -- I'm at the beginning of a bind-off row). 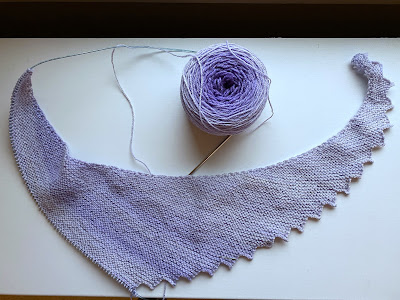 Once again my lighting isn't great today, so I had to edit this photo a bit, but I think you can see some slight differences in the color. I still have 86 g of the 119 I started with, so still quite a bit of knitting to go.

Finally, there's a project you haven't see in a while: the C2C crochet blanket. It's actually grown quite a bit since I last shared it, though it's been probably a couple of weeks at least since I last put in any time on it. 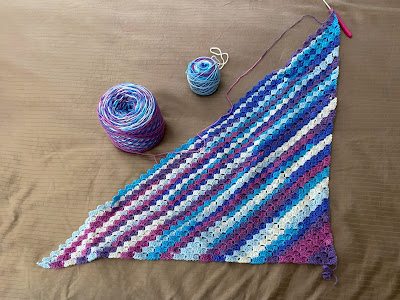 I was getting sick of having to pause to unwind yarn from the oblong skein it came in, so I dug out the other end from the inside and wound it into a cake on my yarn winder. There are two because there was a break in the skein at one point. The other nice benefit of doing this is that I can weigh the remaining yarn much more easily as I go, and that will help me determine when I've gone through half the yarn and can start decreasing. I really thought this was going to be an enormous blanket, but it looks like it'll end up being more of a lap blanket, and that's just fine. I'd really like to devote some time to this to get it finished, so perhaps that will be my next top priority after I finish my sweater.

That's all from me for today! I'll be back on Sunday with some spinning content.