I started spinning in 2008. At the time, there weren't a lot of indie fiber dyers -- even indie-dyed yarn was still a rarity. My first few spins were things that I found at my LYS at the time. It wasn't very long, though, before I started looking for dyed fiber on Etsy and found my first fiber love, AllSpunUp. I am linking to Kristin's shop not so that you can buy from her (because sadly she stopped dyeing -- or at least selling her dyed fiber online -- a while ago) but so that you can look at what she's sold and get a sense of her skill. If you look at the handspun section of my Ravelry notebook and scroll back toward the beginning, you'll see a lot of ASU spins. Most of what I bought was spun pretty quickly, though I have a number of braids still in the stash from after she got really popular and it became harder to get her fiber, thus making that stash precious. This braid, however, was purchased on December 13, 2008, and I'd never gotten around to it. 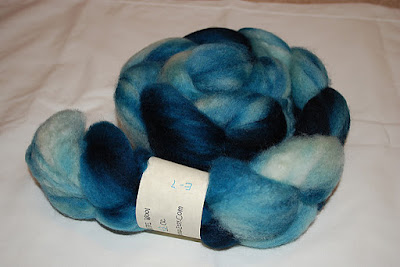 Once or twice I contemplated spinning it; at some point I'd divided it into thirds, and I guess I thought I would card it into rolags at one point, because I found two of them in the bag. I never got further than that, though, and I suppose because it was superwash BFL (not necessarily my favorite fiber to spin) and kind o of boring in its colors (just tones of one color), it wasn't a priority. But there wasn't anything wrong with it, and good fiber deserves to be spun! So my spinning this week was focused on doing just that.

I know that with BFL I tend to get lower yardage than with other wools (I suppose it's just denser), so even though the fiber had been split into thirds, I decided to spin a two-ply yarn to maximize the yardage. The easiest way to do that and to ensure zero waste was to spin all the singles onto a single bobbin, wind them off into a center-pull ball, and ply from both ends. 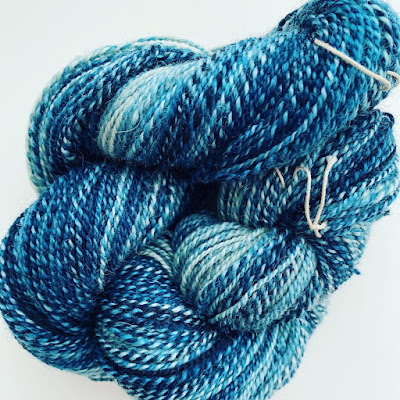 It ended up being a very quick spin -- I spun the singles on Tuesday and Wednesday and plied on Thursday, and then on Friday I skeined and washed the yarn. I'm very pleased with how well distributed the different shades of blue are throughout the skein. 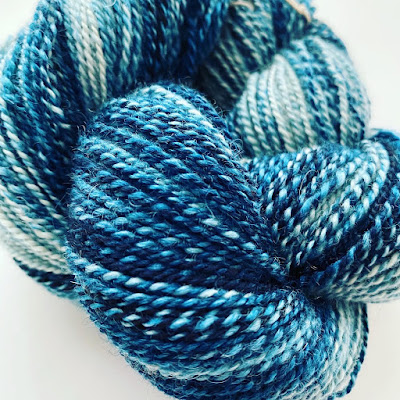 Email ThisBlogThis!Share to TwitterShare to FacebookShare to Pinterest
Labels: All Spun Up, Handspun, Spinning Sundays