We've reached the final Wednesday of January, and here's hoping it's the least dramatic of the four! I am joining with Kat and the Unravelers today to talk about WIPs and reading.

I should be working on projects that were started earlier, but what did I do yesterday? I'm sure you can guess -- I cast on another marled scrap hat. 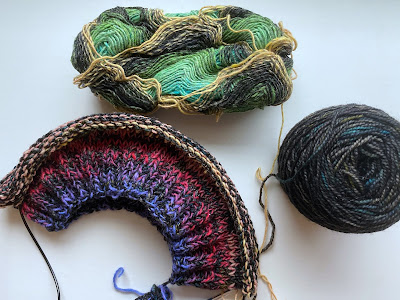 This one is using the remains of a skein of Noro Kureyon Sock (a completely terrible yarn for socks, by the way, but brilliant for this use) and a skein of Murky Depths Dyeworks Deep Sock in a colorway called It's Complicated that is a deep charcoal, almost black, with the slightest hint of blue here and there. The combination of the two has me swooning; I just might keep this hat for myself.

Keeping me excellent company while I've been churning out these marled hats have been some good books thanks to my library hold list. I keep getting surprised by books being available despite being told just before that I have a two-week wait -- I even had to put off a book for a week (love that I can do that!) because I already had two checked out when it came up! Since last Wednesday, I've finished two books, and I'm hoping that I'll be able to finish a third today.

Yaa Gyasi's second novel, Transcendent Kingdom, has shown up on a lot of best-of and award lists from last year, and there's a good reason for that -- it's an excellent book. The main character, Gifty, is a doctoral student in neuroscience contemplating the conflict between what science tells us about the brain and human existence and what the Pentecostal church she grew up in tells her about human nature. In less than 300 pages, Gyasi manages to tackle, with beautiful writing, this conflict as well as issues related to mental illness, addiction, the dissolution of a family, the struggles of being an immigrant and a minority, racism, and loss. It was a treat to read, well worth the time I waited, and a book I could have easily read in one sitting if I'd had the time. 5 stars!

The House in the Cerulean Sea is a book that I know a number of you have read and recommended. It's a little hokey and certainly a book where the moral message -- all beings have value, no matter how "different" they may seem -- is very obvious, but that doesn't take away from the joy. It's a lovely read, especially in these dark times. I waffled between giving it 3 or 4 stars, mainly because I knew exactly where the story was going from about 50 pages in, but in the end I decided it was worth 4 because it was such a feel-good read.

I'm currently reading (and hoping to finish today) Fredrik Bachman's most recent book, Anxious People. I started it yesterday after lunch and have already gotten more than halfway through it, so provided my work email inbox cooperates, I shouldn't have much trouble. If you enjoy Bachman's books, I think you'll like this one -- it seems very typical of his writing style and characterization (and likewise if you find his books annoying, you probably won't like this one). Once I finish, I'll be starting another library book, one that I checked out but didn't get to start because The House in the Cerulean Sea came it about an hour later (and I figured I should read it first because it has a long wait list). I've been meaning to read The New Jim Crow for several months, and while it'll be very different from what I've been reading, I think it will be a good one.