Happy Friday, friends! This week has felt longer than usual, perhaps because it came after a long weekend for me and perhaps because it's been unbearably hot this week. We've had high temperatures in the 90s and heat indexes pushing 100 for several days in a row, and the humidity has been the worst. I have gone out to exercise early (around 8 a.m.) the past couple of days to try to beat the heat, but when the dew point is in the 70s, it's virtually impossible. I am very thankful that we have a new air conditioning unit and that the power has stayed on, and I'm looking forward to things improving this weekend.

I've continued to make slow and steady progress on my WIPs this week, and the left front of my brother's sweater is now ready for the pocket slit. 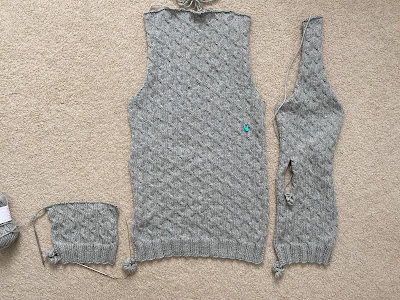 I'm fairly certain that I found an error in the directions for the ribbing on this piece, which entailed some ripping and reknitting, but I'm on track now. I do feel like I'm getting faster as I go along with this project because I am now more familiar with the stitch pattern, but there is still quite a bit of knitting to do. Even though I know it will be fiddly, I've decided to knit the sleeves at the same time because it will ensure that they are the same and also save me from the mental hurdle of having to knit the same thing twice (yes, I'm aware that I'm just playing a trick on myself, but somehow knitting two of the same thing at the same time seems less onerous than knitting one after another).

Despite the fact that I had this project and my languishing Hitchhiker and a spinning project, I felt the need to cast on something on Wednesday afternoon. I had back to back meetings yesterday morning and wanted something mindless and easy to keep my hands busy. Enter my bag of sock yarn scraps: 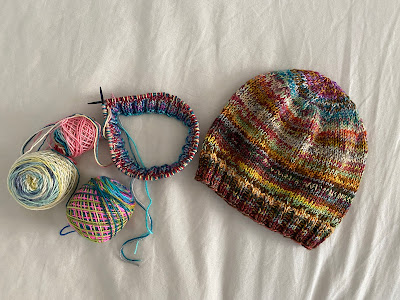 Did you know that if you hold fingering weight yarn triple, it knits up very quickly? I'm sure you did! I'm currently involved in two make-alongs, and some basic beanies for charity count for both and are scratching that itch I had to cast on something new. I think after I finish this second one I'll feel better about getting back to what was already in progress. These hats are nothing fancy: 88 stitches, about an inch and a half of 2x2 ribbing, a stockinette body, and swirled crown decreases. All the yarn is Fibernymph Dye Works Bounce, an 80/20 superwash merino/nylon blend, leftover from socks and other projects. For the first hat, I mainly chose warmer colors, and the teen/women's-sized hat used up almost 350 yards of scraps. I'm copying that for the second hat but using a cooler palette. You may remember that I made a bunch of scrappy, marled charity hats like this last fall, but I hadn't made one in a while and my stash of charity items has gotten depleted after sending a bunch off earlier in the year. Summer seems like a good time to build up that stash again!

I am very much looking forward to the long weekend ahead (I have Monday off for Juneteenth), not least because we have a bunch of celebrations to look forward to. Today is my mother-in-law's birthday, so we are going out to dinner with my in-laws, my brother- and sister-in-law, and my nephew. Then tomorrow is my mother's birthday -- and it's a big one, though because I know she's sensitive about her age, I won't tell you the number. My aunt (her sister) and my aunt and uncle (my father's sister and brother-in-law) are coming to visit from out of town, and we're also surprising her with a dinner tomorrow evening. And of course Sunday is Father's Day, so we'll be having brunch. It will be great to see family and celebrate some happy occasions, and I am also quite happy to have some extra time away from work on Monday.

I hope you have something to look forward to this weekend, too! Remember to stay hydrated and wear your sunblock!