Despite my best intentions to get this written up ahead of time, it's now after 9 a.m. on Wednesday and I am just getting around to my weekly Unraveled Wednesday post! Thanks as always to Kat for hosting this weekly link-up.

Today is, of course, Yom Kippur, and I slept in until almost 8, so I'm feeling pretty good despite not having had my morning coffee. We'll be leaving soon for services, so I'm putting this together a bit quickly (so forgive me for that!).

I've mainly been working this week on the Newborn Vertebrae for my new nephew, and I'm just about finished with the first sleeve. 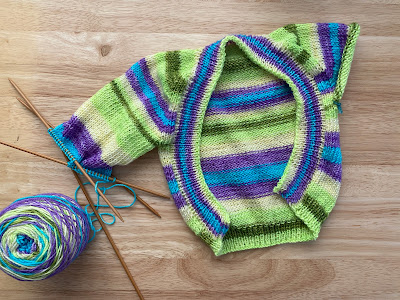 I know some of you might be surprised to see me working on DPNs, which I very rarely use. The reason is that the circular needle I was using for the body was too short to comfortably magic loop, and I was too lazy to go looking for a longer one. The DPNs were spotted in a few seconds, so I went with them. They're not my favorite, but I can deal with them for the very short amount of time it takes me to knit these sleeves.

I've also been doing some swatching for my next sweater, with mixed results. 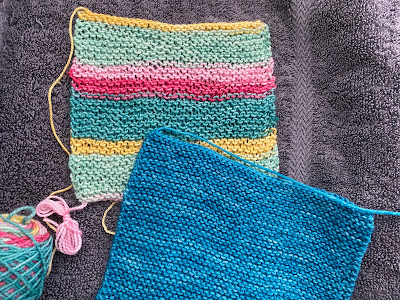 The pattern is Recalibrate, which is designed to be knit at a loose gauge with fingering weight yarn. The swatch at the top was knit on size 7 (4.5 mm) needles and I still have too many stitches per inch. I find the fabric to be terribly sloppy, and I think a garment knit at this gauge would start to stretch out of shape the minute I put it on. The swatch at the bottom was knit on size 4 (3.5 mm) needles, and I like this fabric much better -- it has drape but still has some structure as well -- but the gauge is drastically different from the pattern. So I still have some pondering and maybe some math to do.

Glory was the last book on the Booker Prize short list I still had yet to read, and as my library didn't have it yet, I ended up ordering a copy. This book is an allegorical retelling of the fall of Robert Mugabe in Zimbabwe in which all the characters are animals. It's an inventive way to tell the story, but I also found that it was completely clear exactly where and when the story was supposed to be set. I'll admit that my knowledge of the country and its political situation is not the greatest, but I did have a general awareness of it. Perhaps if I'd known more I would have enjoyed the book more, but I found it really repetitive and a slog at times. I gave it 2.5 stars, rounded up to 3. 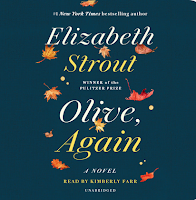 After last week's success with Olive Kitteridge, I listened to the sequel, Olive, Again. Whereas in the first book I found Olive to be a bit of a curmudgeon, I found her endearing in the follow-up, and I loved that even as she was reaching the end of her life, she was finding it possible to examine who she was as a person and decide to change certain aspects of herself she found she didn't like. There were some stories in this collection I didn't care for as much, but overall I really enjoyed my return to Olive's world. I gave it 4 stars.

Currently I'm listening to Nightcrawling from the Booker long list (I'd had it on hold at the library for a long time and finally got it yesterday) and I've also pulled out Braiding Sweetgrass, which has been on my nightstand all year long and I've read a chapter or two here and there. I'd really like to finish it up now.

What are you making and reading this week?